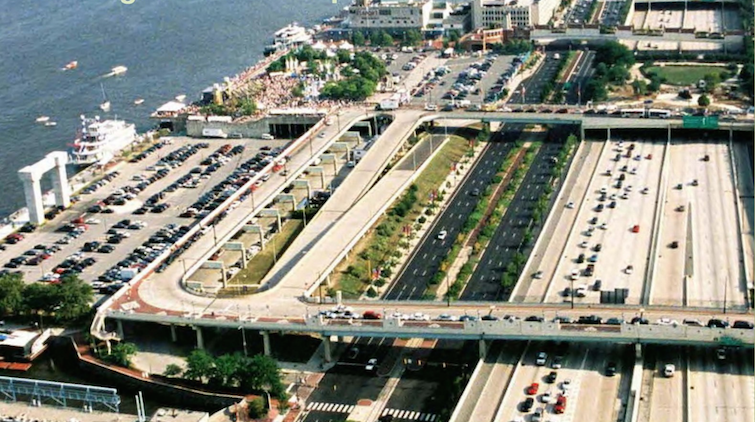 In 2012 the City of Philadelphia adopted the Master Plan for the Central Delaware, based on a historical public planning process in which more than 4,000 Philadelphians participated.

The Plan - which was followed up by a Zoning Overlay in 2013 - calls for walkable and bikeable mixed-use development, public space, and public access instead of the kind of auto-oriented suburban sprawl that has degraded one of our city's most valuable assets for decades.

The Plan and Overlay have proven themselves, with great public spaces like Spruce Street Harbor park drawing millions of people to the waterfront, and private development bringing hundreds of new homes and apartments, restaurants, entertainment, and other commercial activity to the Central Delaware Waterfront.

But one developer is proposing a project that would turn back the clock and threaten all the progress we've made. Bart Blatstein wants to build a super-sized gas station, a strip mall, and acres of surface parking right on the waterfront, at the old Foxwoods site in South Philly.

Don't just take our word for it. Jason Bock of MSC Retail, who partnered with Blatstein on the plan, told the Inquirer,"This is going to be an urban development that's going to look like a suburban development." Drexel's Harris Steinberg, who oversaw the original planning process, calls it “a regression, not a progression… "This is just more car-oriented development."

If you agree that more car-oriented development is the opposite of what the Delaware Waterfront needs, sign our petition and share it with your friends on Facebook.

The undersigned oppose this plan as currently designed, we urge Bart Blatstein to revise it, and Mayor Kenney, Councilman Mark Squilla and the city to do everything in their power to oppose it if it is not modified to fit the Master Plan for the Central Delaware.