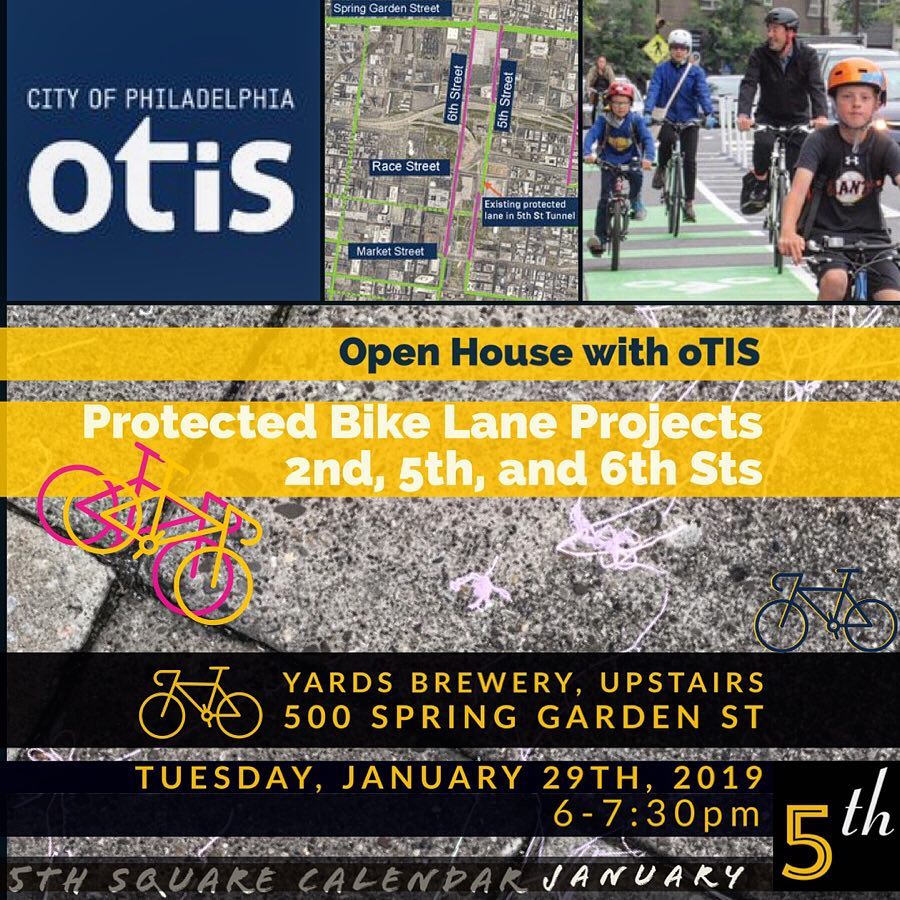 Help advocate for safer streets by attending an open house with the City's Office of Transportation, Infrastructure, and Sustainability (oTIS) in partnership with several neighborhood organizations in Northern Liberties tomorrow. There we can learn more about and advocate for protected bicycle lanes on N. 2nd, N. 5th, & N. 6th Streets between Market Street and Spring Garden Street.

Tonight, January 28, 6:00 pm - 8:30 pm
Chat 'N Chew: Dignity over Dumping - Community Trash Action
Centennial Parkside CDC, along with several other partners, is hosting a talk in West Philly with guests from oTIS, sanitation workers and others involved with the trash collection system. Come share your story on what you did to get a vacant lot cleaned up or come to learn tips for how to get through to get the job done.

Tuesday, January 29, 6:00 pm - 7:30 pm
Activism 101 Training with PennEnvironment
Join PennEnvironment and other activists from around Philadelphia to learn how to best utilize the tools available to us to move the needle forward, push for climate action, and win real results for our environment and communities.

Tuesday, January 29, 6:00 pm - 8:00 pm
Young Professionals in Transportation - Real Estate & Transportation
Join YPT for this free event at Trolley Car Station in the newly renovated 40th St Trolley Portal to hear from Ken Weinstein, the CEO of Philly Office Retail. From investing in transit-oriented development, to creating programs that empower communities through real estate, Mr. Weinstein has made a positive impact at the intersection of housing, development, and transportation.

Wow! The city's proposed street sweeping pilot that tries to appease people who are too selfish to move their cars is getting enormous push-back from the press. They recognize the same things as us: cleaning streets without having people move their cars is tedious, expensive, and ultimately ineffective.

David Murrell from Philadelphia Magazine writes, "No one will have to move a car! And the only tradeoff will be … the occasional urban trash tornado?" in his examination of our failure to have citywide street sweeping in the face of the practices of other large cities and our past programs.

Mike Newall from the Inquirer quipped, "Yes, we’re so afraid of asking people to move their cars that we’re going to deputize a small army of trash blowers to push rubbish under, around, and possibly over parked cars and into the path of the aforementioned street sweepers."

In welcome City Council news, PlanPhilly writes about a bill introduced by Councilman Mark Squilla intended to protect public access to the scenic Delaware River waterway. The bill would impose new limitations on auto-centric development on the city streets that lead to the river and encourages a variety of pedestrian-friendly infrastructure improvements.

If you are a Fishtown resident, a parent of a student attending St. Laurentius School, or a member of the Holy Name Parish, consider signing this petition asking Council President Clarke to rezone the former St. Laurentius church and save the building from demolition.

California's new governor, Gavin Newsom just declared war on NIMBYs, according to the LA Times. The governor threatened to withhold transportation dollars from communities that fail to build enough homes to meet their needs in a bold move towards housing affordability in the state.

The decrease in transit ridership across the United States can be attributed directly to the rise of Uber and Lyft, writes StreetsBlog citing new research by the University of Kentucky. The answer for cities is trickier than simply increasing service, but also entails policies such as congestion pricing, or a broader re-thinking of how right-of-way is allocated in the urban streetscape between cars, transit, bicycles, pedestrians and other uses.

The New York Times reports on the physical and psychological toll of brutal commutes in an article entitled, "Stuck and Stressed: The Health Costs of Traffic." It points to ripple effect of traffic on our finances, our climate, our health, and our mental well-being.  It also looks at how cities are solving this problem through congestion pricing, investment in transit, and bicycle infrastructure.

The Commonwealth of Pennsylvania is seeking William Penn Fellows.

The Philadelphia Citizen is issuing a call for proposals for the Jeremy Nowak Urban Innovation Award and, with it, $50,000 to launch one new urban solution in Philadelphia

The City of Philadelphia has a wide variety of non-civil service opportunities.

Portfolio Associates, Inc. is looking to hire a Director of Marketing/Project Manager.

CICADA Architecture/Planning, Inc. is seeking a Director of Marketing.

SMU DataArts is seeking a Director of Technology.

The City is hiring a Philadelphia Global Identity Project Fellow