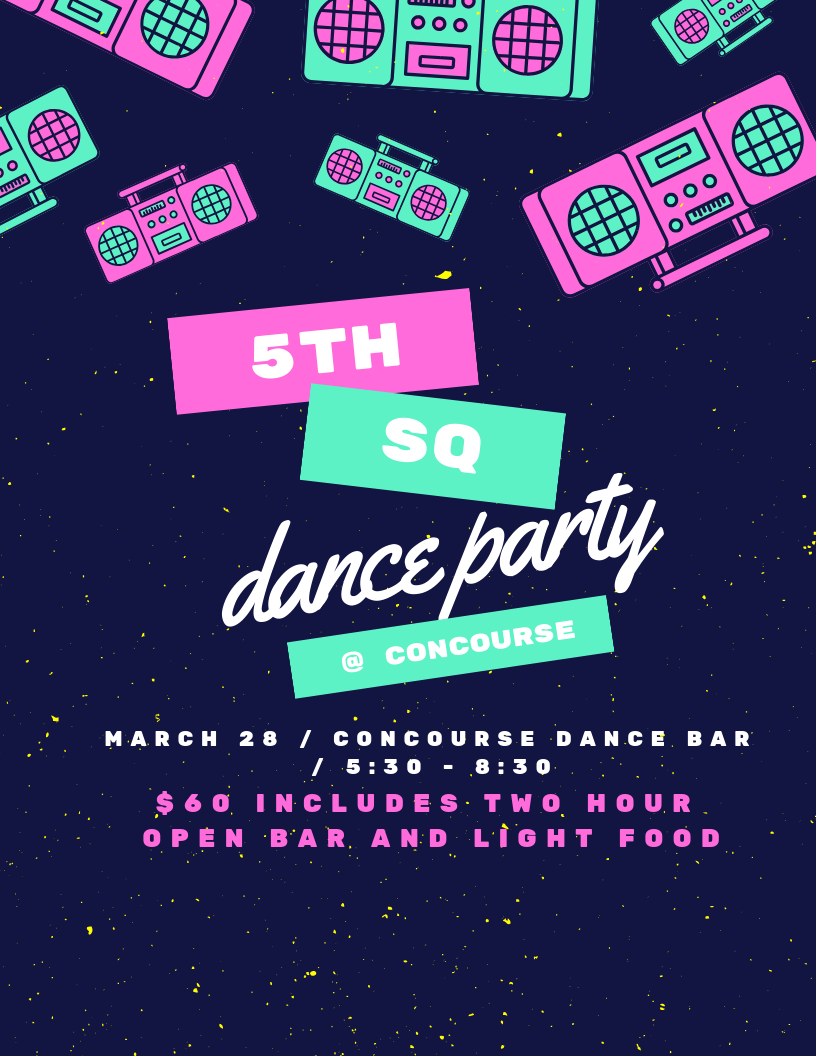 Come to a dance party fundraiser in the Concourse, and help raise money to support 5th Square's 2019 City Council slate!

Meet the candidates and other 5th Square supporters and volunteers who are getting involved to elect a pro-transit, pro-bike, pro-housing City Council on May 21st.

Each ticket comes with two-hour open bar (beer/wine) and light food. Jump in the adult BALL PIT or just dance to the music from guest DJ Andy Pry. Ticket levels start at $60.

The venue is ADA accessible and the event is kid friendly.

Get your ticket here, and invite your friends!

Saturday, March 9, 10 am - 1 pm
Climate Dads Field Trips: John Heinz Wildlife Refuge
In partnership with the best environmental educators from across Philadelphia, Climate Dads is collaborating to create a series of free tours of the city's hidden gems of sustainability-focused learning. Families with children of all ages are invited to join.

Inga Saffron explains the high cost of Councilmanic Prerogative and how the practices prolongs neighborhood blight, encourages petty corruption, and makes our streets less safe. "If Philadelphia ever hopes to realize its potential as a modern city, it’s going to need a constitution fit for the 21st century anyway. One where councilmanic prerogative doesn’t have the final word on the look of the city." In our 2019 City Council questionnaire, we've asked candidates to commit to ending Councilmanic Prerogative over street changes, which is the biggest obstacle to quickly implementing life-saving pedestrian and bike safety upgrades under Vision Zero.

A Philadelphia City Council committee gave the green-light to the construction of a controversial liquid natural gas plant in Southwest Philly last week, over the objections of neighbors and environmental groups.

SEPTA is giving its bus network map an upgrade, writes Jason Laughlin for the Inquirer. "SEPTA’s current transit map, the big picture depiction of all buses, subways, and trolleys in the city, shows a web of indistinguishable red lines twisting among city streets." It's about time we upgraded our bus map to be more helpful, emphasizing frequency and connections. Take a look at the proposed new maps on SEPTA's website and let them know what you think. The agency will be soliciting feedback over the next few months before publishing a final version.

The Pennsylvania Turnpike could be headed for 'catastrophic' reckoning reports WITF, and transit could be on the chopping block if state lawmakers don't come up with replacement revenue. Because of a misguided lawsuit on behalf of trucking companies and the National Motorists Association, Pennsylvania is facing the possibility of a severe funding cut to our public transit systems to the tune of $450 million a year, and potential financial ruin for the Turnpike Commission. "Lawmakers are asking what will happen if commission loses the lawsuit and potentially has to pay back its toll money. Richards said she doesn't know exactly, but it wouldn't be good."

Philly is one step closing to having dockless scooters. The Inquirer writes about recent scooter companies' efforts to break into the Philly market. If paired with larger street safety improvements, scooters could be a useful transportation option for short trips that allows us to decongest city streets of the much larger and more dangerous dockless vehicles: automobiles.

PlanPhilly writes about the latest revised plans for the Dilworth House, an historic Society Hill house on Washington Square that has been sitting vacant for years. It's the last lot on Washington Square that could support high-density housing, but even though the developer has proposed incorporating the tiny house into a larger project, Society Hill neighbors still argue it's out of context—even though the context is a park ringed with other high-rises. The Art Commission and the Historical Commission both have the opportunity to end the 20-year legal battle over this project on Wednesday and Friday of this week, and stop giving Society Hill a pass on building their share of new housing.

The slowdown of the national housing market does not appear to be affecting our region. The Inquirer writes, "The region’s low housing supply — while a boon to many sellers who have had their pick of competitive offers — threatens to exacerbate affordability problems that plague the Philadelphia area and nation. High demand and bidding wars can artificially drive up prices, keeping low- and middle-class home shoppers, as well as first-time buyers, out of the market." How can we quickly add housing at a wider range of price points for first-time home buyers? We could start by legalizing triplexes and small apartment buildings citywide, and passing a Transit-Oriented Development (TOD) Overlay for all of our BSL, MFL, and regional rail stations.

ULI Philadelphia will celebrate transformational projects within the region with the 6th Annual Willard G. “Bill” Rouse Awards for Excellence. Apply to share your project with a national jury of experts. Finalists and winners are featured in local media. Deadline to apply is extended to March 8th.

Knight Foundation is inviting nominations for the inaugural Knight Public Spaces Fellowship, intended to recognize leading civic innovators who have created or influenced great public spaces that have transformed communities across America. A small group of selected fellows will share up to $1 million in grants to continue their work. Nominations due March 22nd.

Rad Girls presents their 5th Annual Rad Awards, a ceremony and celebration honoring inspirational women leaders in the fields of technology, media, culture, and business. Accepting nominations which are due by March 15th, 2019.

The City of Philadelphia seeks a Program Manager to perform programmatic administrative analysis and legislative and regulatory affairs advisory work for the Office of Transportation, Infrastructure and Sustainability (OTIS).

Cedar Park Neighbors is seeking nominations for its Board of Directors.

The City of Philadelphia's Dept of Commerce is seeking a Communications Director.