Newsletter: Party in the Concourse THIS THURSDAY to support our 2019 City Council slate 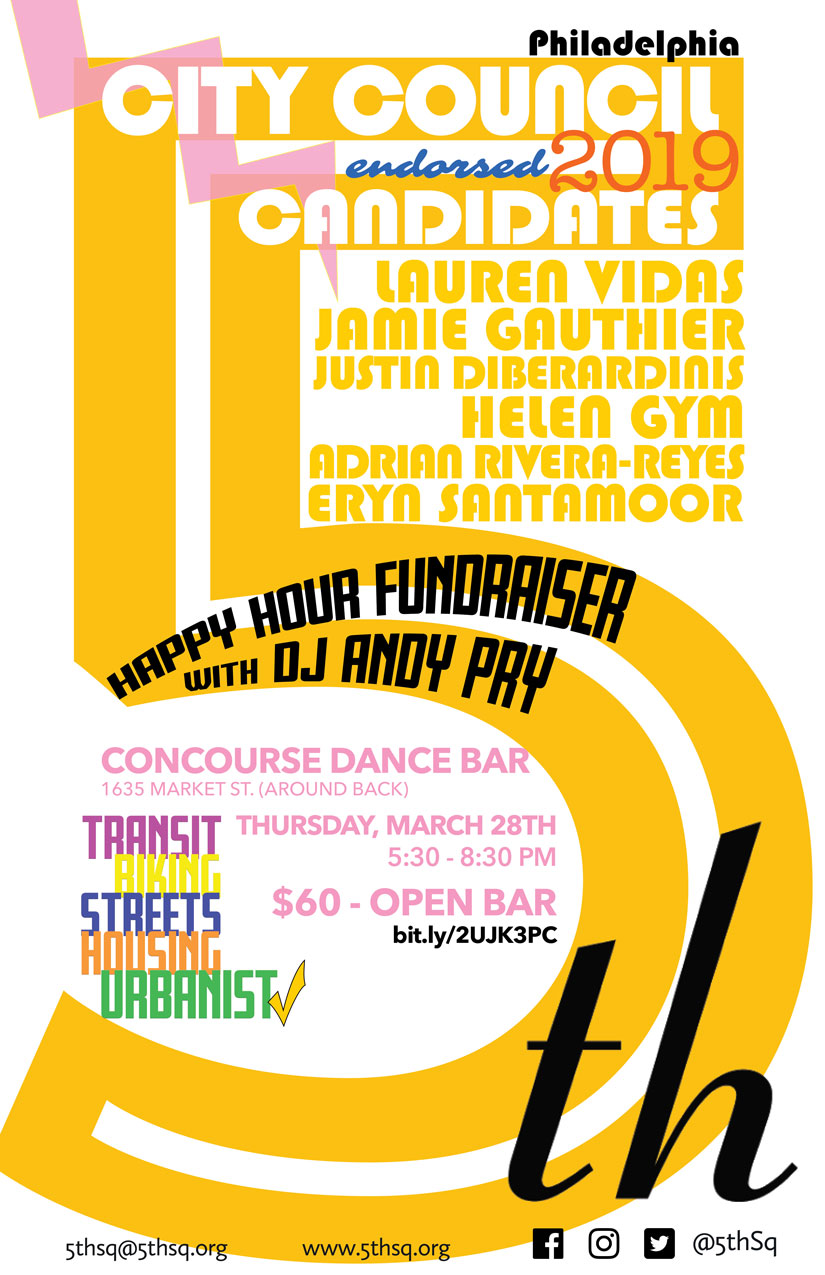 Can't dance? Don't worry, neither can we! This unique venue is in the space of the old Turf Club at 1635 Market St and is worth checking out on its own, and this is a great opportunity to help support the urbanist candidates we need to win their elections this May if we want to turn the tide in City Council on transit, biking, streets, and housing policy.

$60 admission includes two-hour open bar, food, and of course, the ball pit. Kids are free and the venue is ADA accessible.

We're also offering our members a buy-one-get-one deal on tickets for this event. Become a member at $5 a month to access this deal at checkout.

Wednesday, March 27, 6 - 8 pm
Lauren Vidas Fundraiser at Lou Bird's
Please join Lauren Vidas (a 5th Square Endorsed Candidate for City Council's 2nd District) for the final fundraiser before the next campaign filing deadline on April 1st. Come down to show your support and enjoy some drinks and snacks included.

Tuesday, April 2, 6 - 8 pm
Lauren Vidas for City Council - Volunteer Appreciation Party
Join Lauren for a volunteer appreciation party to cap off a successful petition period and help kick off the rest of the campaign. Didn't get a chance to help out with petitions? No Problem! Come by and meet other volunteers and sign up for future volunteer opportunities.

SEPTA keeps losing bus ridership, according to new FTA data reported by Jason Laughlin, but there isn't the urgency from the City or SEPTA to do anything to reverse this troubling trend in the short-term. "In Philadelphia, street congestion has made bus service slower and later. SEPTA has been advised to eliminate transfer fees to boost ridership, but it will be another year before SEPTA decides its transfer fee policy. The city is interested in creating dedicated bus lanes that would give buses clear travel paths, but the two that exist on Chestnut and Market Streets suffer from spotty enforcement, and creating a third on the Boulevard could take years."

Kudos to SEPTA on their revamped SEPTA Key website, now in beta mode.  It is MUCH more user friendly.  It's apparently one of many fixes in the works. 5th Square's push for this change was noted by Technically Philly.  Now lets get SEPTA to redesign those kiosks!

Three big street safety bills have advanced in City Council this election season thanks to lobbying by the Bicycle Coalition and other Vision Zero advocates: permanent protected bike lanes for Market St. and JFK Blvd, a new unarmed class of traffic enforcement officer, and speed camera enabling legislation for Roosevelt Boulevard.  All of these measures are long overdue and can't come soon enough.

ABC6 reports on the dangers of illegal crosswalk parking in neighborhoods around Philadelphia and the current state of lenient and inconsistent enforcement by the PPA and Philly Police. The PPA cites a lack of staff to cover enforcement for the entire city, but the PPA also defers to City Council on where they enforce illegal parking.

Inga Saffron's laments the current suburban-style development happening along the Delaware River waterfront, where the Master Plan for the Central Delaware envisioned mid-rise apartments and walkable retail. "The problem with building townhouses on those sites is that they consume lots of space, yet add little in the way of population. None of the new developments are dense enough to support retail. Worst of all, the townhouse designs generally follow a suburban model, one that results in self-contained, auto-centric enclaves."

An Inquirer Board Editorial argues that fully funding eviction defense, in addition to being the right thing to do, is also the fiscally-responsible thing for the City to do. We agree: all people facing eviction should have a City-guaranteed right to counsel. "According to the Stout [consulting firm] report, if Philadelphia were to fully fund eviction defense at a total cost of $3.5 million per year, the city as a whole would avoid $45.2 million in quantifiable annual costs -- $26.4 million in savings in shelter costs alone."

Jamie Gauthier, who 5th Square supports for the 3rd Council District, was featured in the Inquirer in an article profiling her race to unseat a long-time incumbent. "Gauthier says she’s running to increase transparency over district development decisions. She supports term limits for Council members, curbing Council’s largely unilateral control over land disposition — known as “councilmanic prerogative” — and instituting Philadelphia 2035." According to the article, Councilmember Blackwell is still refusing to debate Gauthier.

Society Hill Civic Association is seeking Board members. The election is May 15 at the general membership meeting. To nominate yourself or a neighbor submit a petition signed by 10 residents. Submissions must be made by March 30 to [email protected].

Center City Residents’ Association is looking to fill several Board seats for our fiscal year beginning July 1, 2019.  Board members generally serve a term of 3 years. Interested members are encouraged to forward a resume or summary of qualifications as soon as practicable to: CCRA; 1900 Market St., 8th Fl.; Phila., PA 19103 or by email:  [email protected], with "Board Candidate" in the subject line.

The Global Philanthropy Partnership (GPP) and the Urban Sustainability Directors Network (USDN) are pleased to offer seven summer 2019 fellowship opportunities with local governments, including the City of Philadelphia.

Walk and Bike to School Day wants to encourage walking and biking by celebrating students that walk, bike, and roll to school. This City initiative is looking for schools to participate.

The Common Market Mid-Atlantic, a nonprofit mission-driven distributor of local foods to the Mid-Atlantic region, seeks an Executive Director to lead them through an upcoming period of growth.

Philadelphia Parks & Recreation is hiring for a variety of seasonal jobs.

The City of Philadelphia is seeking School Crossing Guards

The City of Philadelphia seeks a Program Manager to perform programmatic administrative analysis and legislative and regulatory affairs advisory work for the Office of Transportation, Infrastructure and Sustainability (OTIS)

McCormick Taylor, Inc., the transportation engineering and environmental planning firm, has an immediate opening for a Planning and Communications Group Leader in its Philadelphia office