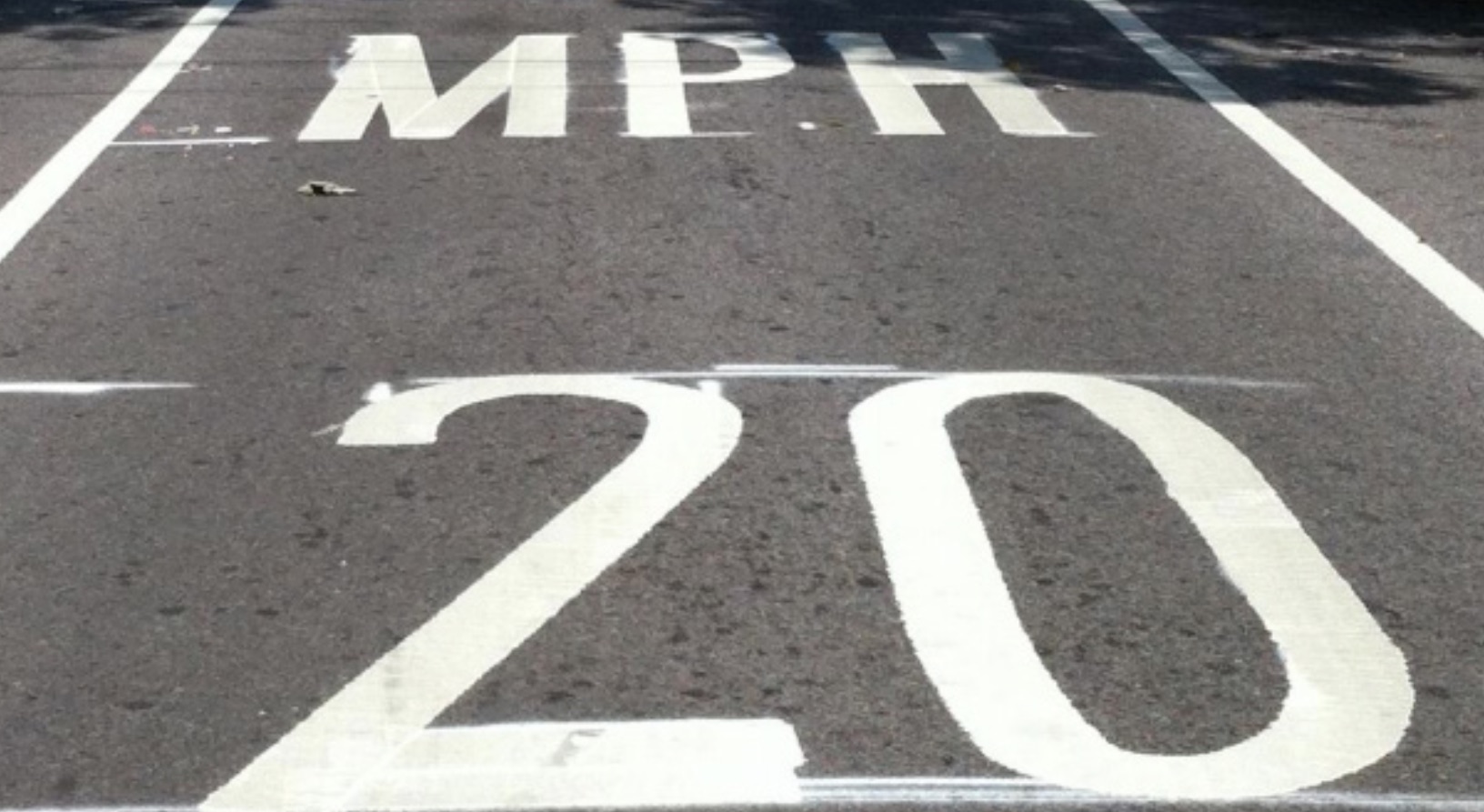 Slow Zone Applications are due this Friday, January 18th!  Check out the advocacy tools on our 'Neighborhood Slow Zone' Campaign Resources page, and get your application in for a slow zone in your neighborhood.

After your application is submitted, join us for a Slow Zone Deadline Day happy hour with other slow zone organizers and Vision Zero supporters this Friday at Le Viet on 11th and Washington!

5th Square members are invited to attend a members-only meeting on January 23rd where we'll be kicking off our 2019 City Council organizing efforts with a special briefing on the state of the campaign landscape, and an informal straw poll of members to help focus our 2019 endorsement process. Become a member today or sign up at the meeting, and get involved to help us organize for the 2019 Council elections!

Wednesday, January 16, 6:00 pm - 7:30 pm
Listening Session on Traffic and Safety @ Cobbs Creek Library
AARP of PA, in conjunction with the PHL Vision Zero Alliance, is hosting a neighborhood listening session on traffic and safety in West Philly.  Come to share your thoughts, concerns and ideas on how to improve the streets in West Philly and citywide. 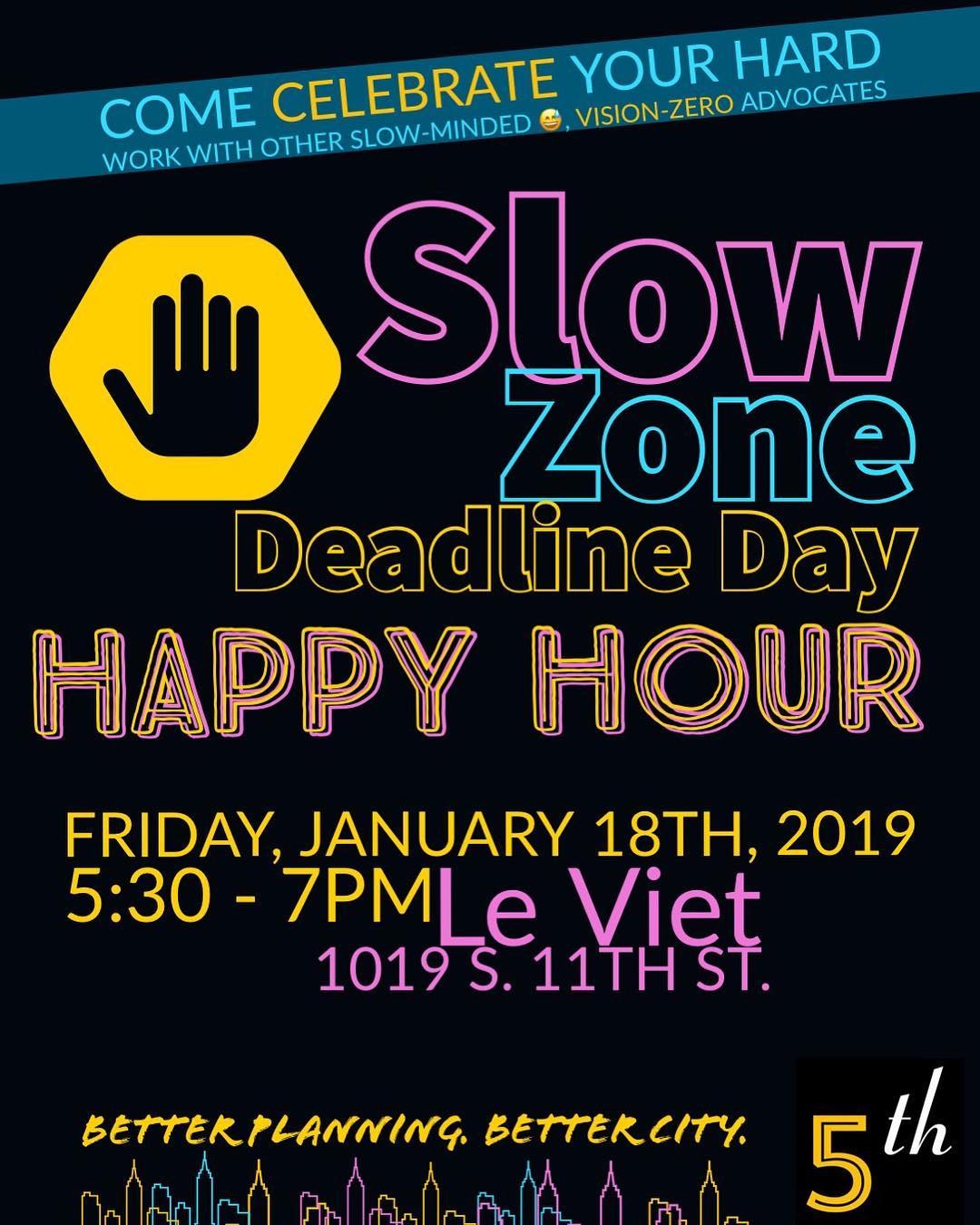 Wednesday, January 23, 7:00 pm - 9:00 pm
5th Square Members Event - 2019 City Council Organizing Kick-off
We're kicking off our 2019 City Council organizing efforts with a special member briefing on the state of the campaign landscape, and an informal straw poll of members to help inform our 2019 endorsement process. Become a member today, or sign up for a membership at the meeting to participate.

Showing up to public meetings works! Last week, there were three neighborhood meetings concerning bicycle infrastructure in Center City regarding the future of the protected bike lane pilot on Market St and JFK Blvd, and proposed protected bike lanes 10th and 13th Streets. 5th Square and the Bicycle Coalition promoted these meetings to our readers via this newsletter and other targeted alerts, and a lot of you showed up! As reported on the Bicycle Coalition blog, all three meetings were enormously positive with the local organizations voting to support safer streets. 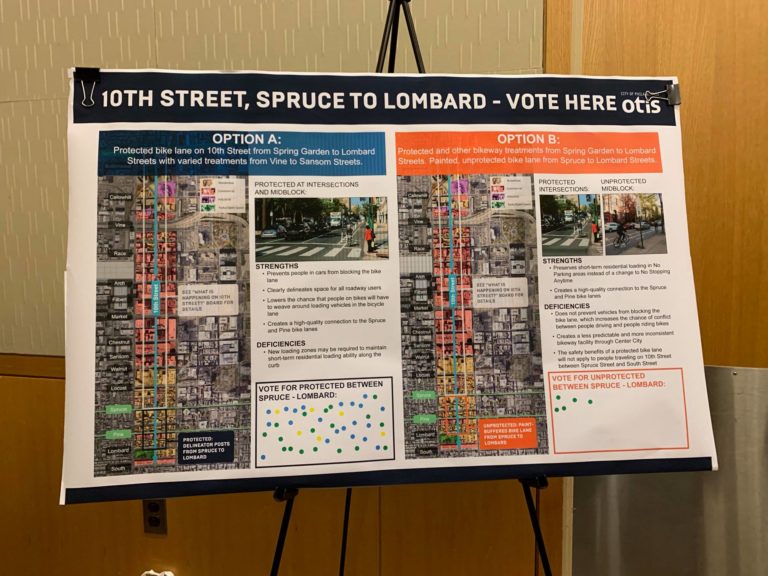 Transit funding isn't why the PA Turnpike Commission keeps having to raise tolls—it's all the budget-busting highway widening projects the Turnpike is funding, writes Ryan Deto, in a must-read post about state transportation funding politics. "But the Turnpike Commission is also in the midst of a massive expansion project on 470 miles of its roads. That project would add an extra lane in each direction to most of the main I-76, as well as the Northeast extension (I-476) from Philadelphia to Scranton. The entire project is estimated to cost $6.9 billion. And according to a report by consumer advocacy group PennPIRG, the turnpike expansion is a waste of government money and deemed a “highway boondoggle.”

Traffic deaths spiked on Roosevelt Boulevard last year, writes Jason Laughlin, but we might not see the recently-authorized speed enforcement cameras rolled out there until the fall. Laughlin says City Council still needs to vote to authorize the cameras, even though the state has already legalized the technology.

Friends of Bainbridge Green unveiled new renderings of their vision for a Bainbridge Green park between 4th and 6th Streets in Queen Village. They're also looking for board members, for those interested in helping this project along. Emal them at [email protected] to inquire.

A new California state bill would require complete streets designs as a baseline for state roads that run through cities—a change we desperately need here in Pennsylvania, where a large percentage of Philadelphia's High Injury Network streets are also PennDOT-owned streets. The bill would "require the state Department of Transportation — Caltrans — to consider bike lanes, buses and pedestrian walkways whenever it starts a major road project. It would mainly apply to state highways that function as city streets."

A Green New Deal also needs to fix urban land use to cut greenhouse gas emissions, writes Jenny Schuetz, and the federal government needs to get in the game with new rules and funding conditions for local governments. "The Green New Deal should set clear benchmarks for environmentally sound land use, provide financial assistance to offset compliance costs for lower-income households and communities, and enforce penalties from localities that do not improve."

Generocity is hiring an Editor

SOSNA is looking for Zoning Committee volunteers in Graduate Hospital

Riverfront North is hiring a Programs and Partnerships Manager

Habitat for Humanity is hiring a Grants Manager

NKCDC is hiring a Corridor Manager

The City is hiring a Community Arts Coordinator

GreenLight Fund is hiring an Associate