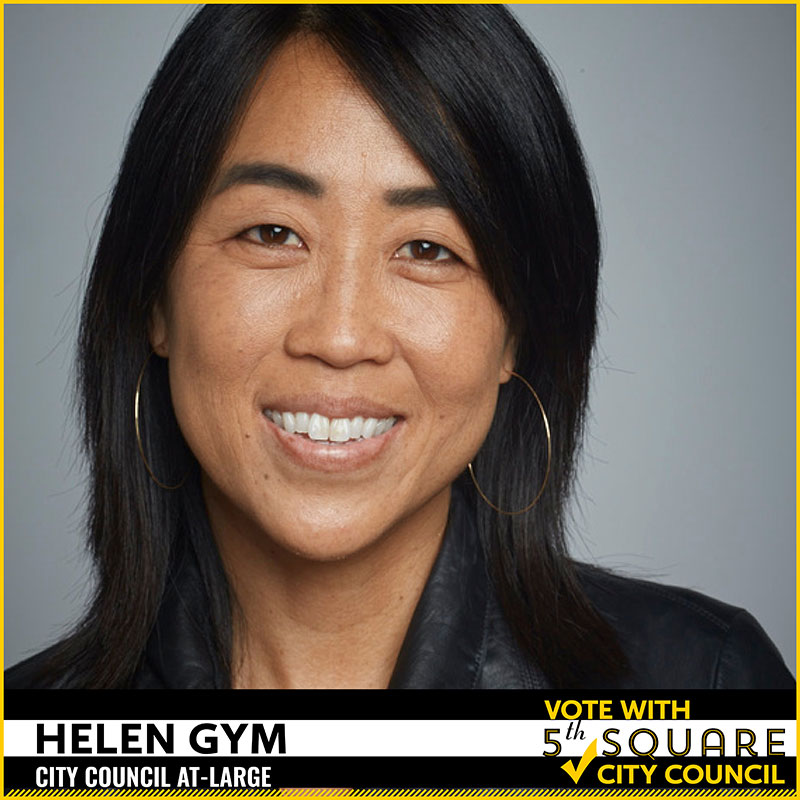 I came to City Council after an organizing career centered on funding public schools and promoting equitable development in immigrant communities. I fought against casinos and stadiums in Chinatown and the closure of public schools because I believe in the promise of public spaces and dense, livable communities.

As an At-Large councilmember, I’ve pushed for a citywide vision that promotes housing as a human right and a connected city encouraging ease of mobility within communities. I was a vocal proponent of Rebuild’s investment in public parks, libraries and schools, and continue to support the development of public play spaces such as school playgrounds. My pedestrian safety bill promotes stricter standards for sidewalk safety around construction sites. I will continue to push for increased fines for illegal closures and permit violations. I believe zoning can be used as a tool for fair housing and integrated neighborhoods, and I support increasing multifamily zoning to help expand inclusionary housing.

I have fought for transit policy that makes Vision Zero a reality and challenges poverty and inequity in our city. I pushed for an equity agenda during the development of the CONNECT plan. I believe in income-based fares, fare capping, the elimination of transfer fees, a transit program for university students, and free transit for vulnerable classes, in particular youth. As a neighborhood cyclist myself, I believe in the expansion of protected bike lanes and rigorous attention to their evolution and improvement.

I will continue to organize alongside transit advocates who see their work aligned with a broader equity agenda for our city.

#NotaParkingSpot is Philly Twitter at its finest. I believe the advocacy of groups like 5th Square and Feet First Philly have brought significant attention to the pervasiveness of blocked sidewalks and curb cuts across our City. I am working to improve my pedestrian safety bill with stronger fines and penalties. I helped win safer pedestrian crossing at Frankford Avenue. I have aggressively addressed enforcement with our Streets Department, winning a publicly accessible website to track blocked sidewalks and construction permits. I will continue to be a loud advocate on behalf of all pedestrians and sidewalk users.

One death is one too many. As a result, Vision Zero remains a work in progress. Like many of you, I want this work to move faster. I have mourned with many members of the 5th Square family the horrible losses and deaths across our city. I am deeply committed to Vision Zero’s plan to end accidents near schools and for youth who are travelling to and from school. As a member of the CONNECT advisory committee, I challenged the limited goals of the City’s strategic innovation plan, pressing the Administration to commit to ambitious deliverables that I believe are attainable with meaningful energy and investment. And I will continue to ensure that a diverse cross-section of communities across Philadelphia are engaged in the planning and execution of Vision Zero, and that goals are completed as quickly as possible.

Yes. Daylighting is an essential strategy for improving pedestrian, cyclist, and driver safety alike. I believe this needs to happen at a meaningful scale and would prioritize intersections surrounding schools.

Yes to dedicated local funding, but we can’t do this alone. Philadelphia has one of the most expensive transit systems in the nation while being the nation’s poorest large city. We can and should do more but we require significant state and federal support especially when it comes to infrastructure improvement or expansion. Additionally Philadelphia holds only two seats on the SEPTA board and there is no guarantee that dedicated local funding would go toward solely local improvements. When I had the chance to appoint someone to the SEPTA Community Advisory Board, I appointed a single mother of three who relies on and uses public transportation exclusively, and I think this perspective needs to be more significantly represented on SEPTA’s board. I’m open to a range of revenue options, including dedicating a portion of the parking tax towards public transit. I would like to see common sense revenues like red light cameras fines go toward either Vision Zero or transit funding rather than being claimed by the state as well.

The city needs a bus network redesign that improves efficiency and connectivity while enhancing equity. Any redesign plan must eliminate transfer fees, and I support stop consolidation that is conscious of the barriers that those living with disabilities face. In the poorest big city in the nation, our difficulty lies in a redesign that enhances connectivity within communities that have faced historic disinvestment. A plan for equity must specifically consider those who live in neighborhoods with high concentrations of low-income households, residents of color, residents with disabilities, and households without personal automobiles. A bus redesign plan, while improving efficiency, must explicitly improve opportunity, quality of life, and mobility for these residents.

Housing is a human right, and I have gone on record supporting inclusionary zoning and expanding multifamily zoning as a means to get there. Clearly 13% is not sufficient, and I support expanding in areas around transit and in areas of high opportunity. This is just one tool but a meaningful one in helping fulfill our commitment to fair housing and neighborhood desegregation, and to help ensure that more Philadelphians have a chance to live in communities well serviced by transit and connected to jobs and public amenities.

Further reading: https://www.sightline.org/2018/08/15/adus-backyard-cottages-affordable-housing/
ADUs are an important part of ensuring that we can achieve autonomy for people with disabilities and allow for aging in place. I believe that we should revisit ADUs in our zoning code and personally believe that they should be mapped widely throughout the city.

I have worked towards an agenda that brings forward a Housing as a Human Right mandate. I led a campaign that created a historic legal defense fund for renters facing eviction and an anti-eviction task force initiative that spurred reforms throughout city government and the courts. This includes a rule change in the courts that require landlords to be licensed for a year in order to file for an eviction and prevent landlords from evicting people from properties with open code violations. I co-sponsored Good Cause legislation and have championed the provision of local rent subsidies into the City’s housing plans for the first time. I believe radically restructuring the tax abatement will ensure that our growth is equitable and have introduced a comprehensive package of bills to reform the abatement for Council's consideration. I believe in fair housing and inclusionary zoning, and support prioritizing the creation of truly (and permanently) affordable housing whenever we sell public property.