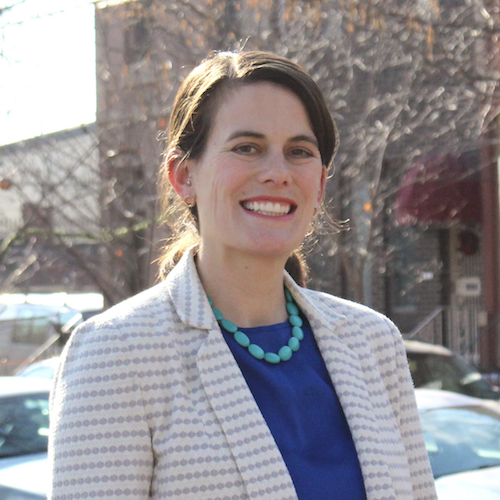 I am the mother of two young sons who will one day attend our neighborhood public school. I am running for State Representative because I am frustrated by our current political system.

I am not a typical political candidate. I have never run for office before. My husband and I have health insurance through the Affordable Care Act, while my kids are covered by CHIP and Medicaid. When I’m in Harrisburg, I won’t be fighting for vague policy but for changes that directly affect my life, the health of my children and many of my neighbors. In addition to a healthcare system that works for all of us, I believe we need to ensure that SEPTA works well for every Philadelphian and that our streets are safe for every person, including people who walk, bike, drive and travel by bus or subway. I believe elected officials should work every day to meet our needs, not the desires of the super rich or corporate and special interests. I’ll support waterfront development in the 184t h district that conforms with grassroots work of the Central Delaware Advocacy Group, so all residents can enjoy our waterfront. I’ll work with neighbors and community groups to leverage transit-oriented development on the Broad Street Line and address the affordable housing needs throughout the district.

I will draw on what I have heard from residents of the 184th, as well as from my personal experience as a bus and subway rider, a pedestrian, a driver and biker and my more than a decade of experience working as a reporter at public radio station WHYY, covering community affairs and politics. I spent my days asking tough questions of people in power and holding politicians and leaders accountable for their decisions about legislation and about spending public money.

Funding for the state police should be moved out of the PennDOT budget. Many of the Pennsylvania municipalities that are relying on the state for their policing are poor and rural municipalities that are financially struggling. Right now revenue doesn’t cover the cost of services Pennsylvanians need – because of years of inadequate budgeting. I support pulling state police funding out of PennDOT and charting a path forward that includes sustainable funding for policing of these municipalities. The people who are controlling the economic resources of our state are not paying their fair share to fund the services Pennsylvanians need. We must ensure the wealthiest Pennsylvanians are paying their fair share.

To benefit all of us, we need leaders in Harrisburg who can build support among rural legislators for additional general fund revenues. I grew up in rural Pennsylvania, in a small town where people greet each other and watch out for each other just like they do on my block in South Philly. To be the most effective representative for us, I’ll use my life experience to talk with lawmakers and individuals from across Philadelphia and the state about how we can work together on issues like the state police budget and Motor License Fund.

To be politically-viable any new road pricing in Pennsylvania would need to apply to all interstates, exempt commuters, and restrict revenues to transportation investments along interstate corridors.

3. Will you advocate for the expansion of the Broad Street Line to the Navy Yard? How should the state pay for this expansion?

The Navy Yard needs better transit options. I am concerned that Broad Street Line expansion would consume an enormous amount of resources to benefit a relatively small group. With SEPTA already planning major investment in new trolleys, we need to take a close look at extending the Rt. 15 from Frankford Ave and Columbus Boulevard along the waterfront to ATT Station and into the Navy Yard.

This approach would create new connections along the waterfront, in portions of South Philadelphia without good transit service today, and provide more comprehensive service throughout the Navy Yard. It would also create the opportunity for a new trolley maintenance facility to be located at the Navy Yard. Any major transit expansion will require investment from the federal, state and city governments. Any investments we make should be for the benefit of all people, should create family sustaining jobs and should expand the sector of unionized workers.

Our neighbors with disabilities deserve excellent transit options to get to work, school, healthcare appointments, and friends and family. We need new solutions to meet the needs of people who currently rely on paratransit so they can live independently. I’m committed to looking at best practices from across the globe exploring how they can be implemented in Pennsylvania. This is particularly important in the 184th, as I hear from many aging residents about their struggles to stay in their homes as they get older. We must make sure we support them. Any new transit we invest in must be ADA accessible — that is non-negotiable.

I will work with legislators from across the commonwealth to build support for policies that save lives on our roadways. We should work hard to reduce deaths and injuries. These are more than just statistics: they are our neighbors, family members, coworkers and loved ones.

6. Pennsylvania is the only state in the U.S. that bans local law enforcement from using radar for vehicle speed enforcement. Recently a Mayor's Radar Coalition has formed to support lifting the state ban. Will you co-sponsor legislation to lift the ban?

Yes, as long it requires all revenues be spent on transportation safety. This can’t be a revenue generator for municipalities -- it must be dedicated to transportation safety. We must prioritize measures that ensure the safety and well being of our residents. We also must ensure that law enforcement do not use traffic and travel violations as a way to target black and brown residents.

7. The Central Delaware Overlay zoning is the result of years of public planning, but the community’s vision of a walkable, publicly-accessible, mixed-use district has been very slow to take shape. What qualities does Delaware Avenue/Columbus Boulevard—a PennDOT-controlled route— need to have to support that pedestrian-centered vision? Does it have those qualities now?

We must do more so we all have easy, safe access to our waterfront. Columbus Boulevard needs to be a connection from the adjacent neighborhoods to the waterfront, not an obstacle. The critical elements of connectivity are high quality sidewalks, street trees, a beautiful and functional median and development that is oriented to the street.

Balancing local control and state influence is a complicated issue with a troubled history in the U.S., where too often the state influence has silenced local interests with disastrous impacts. Clearly goals like sprawl containment, desegregation and transit oriented development are important for environmental and social sustainability and equity. Building diverse coalitions of support for these goals is the best path to resolving this tension.

I’m leery of one size fits all solutions imposed on localities from Harrisburg, particularly when they could result in dramatic changes to our neighborhoods and to the historic character of communities. I would rather see Commonwealth investments in projects oriented toward encouraging transit oriented development.

I would need to consult with stakeholders including residents, environmental advocacy organizations, building trades unions, contractors, and developers before taking a position on this issue. It would potentially have tremendous impact on our neighborhoods and our daily lives.

Reform of the Separations Act is needed to more efficiently invest tax dollars in public projects. Allowing for Design-Build contracts in other states has had mixed results and requires a level of project oversight that I am not convinced Commonwealth and municipal agencies are prepared to provide. Every public works project should require general contractors adhere to strict prevailing wages, and minority participation requirements for general contractors and sub-contractors. We should work toward the goal of having every worker on public projects be unionized.

12. The Interstate Land Management Corporation (ILMAC) was created by Commonwealth legislation to manage land underneath and adjacent to I-95. The State Representative serves on ILMAC’s board on a rotational basis. On a scale of 1-5, rate your support for the following changes at ILMAC. (1 is lowest, 5 is highest)

B. Sale or ground-lease of ILMAC-owned waterfront parking lots for mixed-use development:   3