One City, One Fare: End the $1 Transfer Penalty 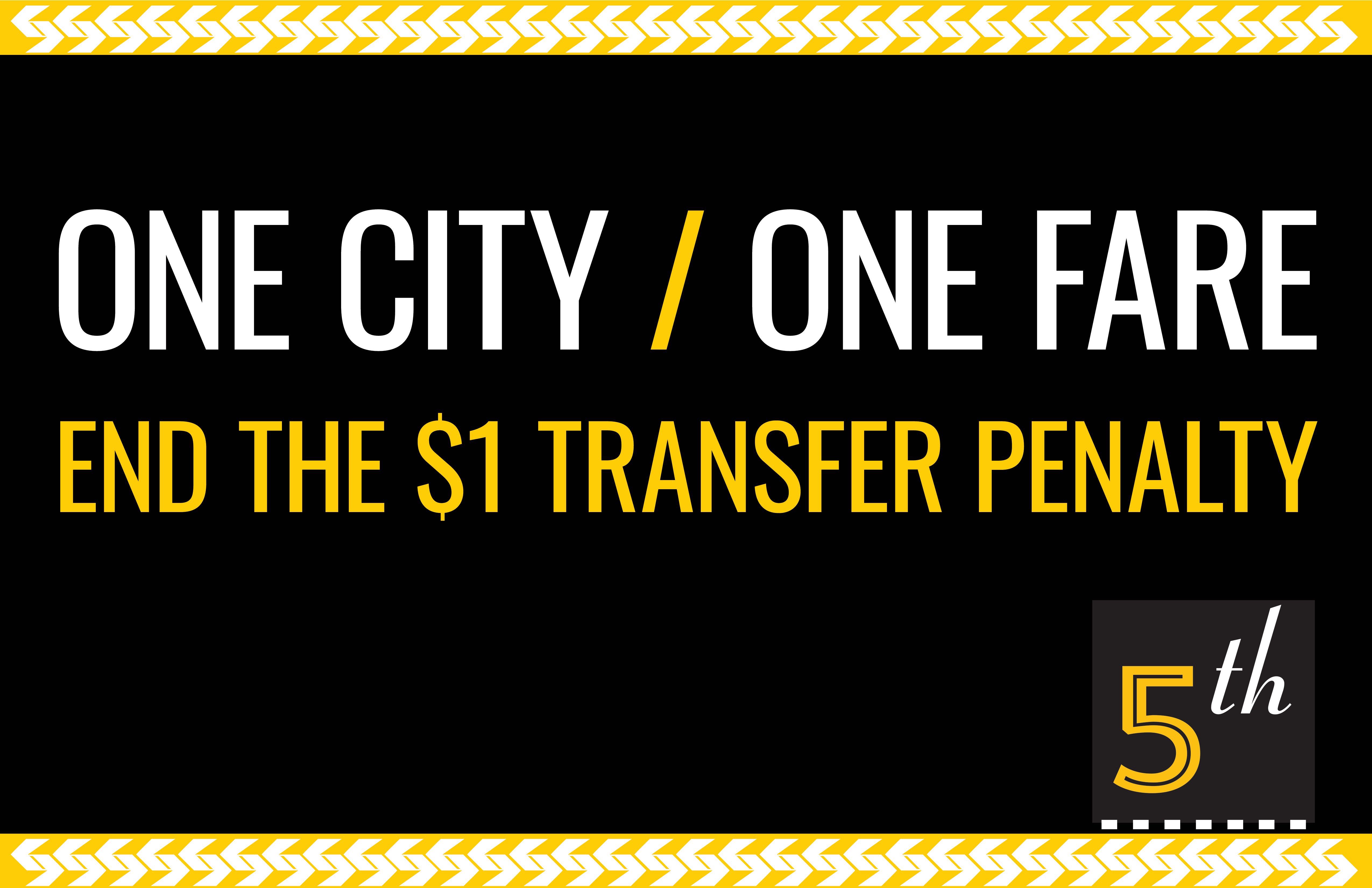 This Spring, it's time for SEPTA to give riders a break, and stop charging an extra $1 penalty to transfer between buses, subways, and trolleys.

Three years ago, 5th Square and Clean Air Council ran a campaign pushing SEPTA to end the $1 transfer penalty when they voted on a new fare tariff, and we succeeded in putting this issue on the agenda.

Now KYW is reporting that SEPTA GM Leslie Richards is open to making this change, thanks to public pressure from transit rider advocates, and an internal push to redesign and improve the bus network. Here are just a few reasons why the time has come to provide free transfers.

The transfer penalty is regressive

The $1 transfer penalty is unfair and regressive. It's an unfair burden on anyone whose home isn’t on the exact transit line as their job, family, friends, school, grocery store, or place of worship. One SEPTA fare should cover your whole trip, from start to finish. With free transfers, every SEPTA rider would have the opportunity to access the whole city, on equal footing with every other rider.

It also costs SEPTA more money to run the system this way. A well-designed bus network is based on lots of simple, straight routes, and lots of opportunities to transfer between the routes. Philly’s street grid is perfectly organized for this, and the forthcoming Comprehensive Bus Network Redesign has the potential to greatly increase freedom of mobility for tens of thousands of Philadelphians. We could have more frequent bus service if we encouraged more transfers, though riders tend to avoid transferring. Charging people extra to do something they don’t want to do hinders SEPTA's ability to provide a faster, cheaper, and more frequent bus network.

It causes pointless crowding and congestion

The transfer penalty encourages people to use the transit network in inefficient ways that waste time, and create unnecessary traffic congestion. For example, many riders will take the 23 bus all the way to Center City from Germantown, rather than transferring to the Broad Street Line at the Broad and Erie station. Taking the bus all the way downtown adds about an extra 20 minutes to the trip, but many riders do this to avoid paying an extra $1 each way. The result is to send more -- and more crowded -- buses into downtown traffic, which could be reduced if more people began transferring to the Broad Street Line.

The technology is ready

SEPTA Key makes free transfers technologically very easy to implement. That's because SEPTA already has a framework for a free transfers policy in SEPTA Key. When you tap onto the subway shortly after getting off the bus, SEPTA Key knows, and it only charges you $1 instead of the full fare. For up to 90 minutes, it only charges you a dollar for a second tap. That means the technology is already in place to go the extra step and make transfers free within a 90-minute window.

A 2011 study from the Delaware Valley Regional Planning Commission looked at a few different scenarios for eliminating the $1 transfer penalty and found that eliminating transfer fees could lead to an 11% increase in ridership over the long term while reducing farebox revenue by only 3.6%. SEPTA could see greater short-term revenue loss and a more modest bump in ridership in the near term. They collect about $12 million in revenue from transfers each year that they would need to make up somewhere.

But this needs to be considered within the larger context of falling city transit ridership. SEPTA ridership has been falling, especially on buses, and they're going to need to make some investments to win riders back. As the DVRPC report suggests, eliminating the transfer penalty is one of the more cost-effective investments we can make to reverse our transit ridership decline. Especially since free transfers are a necessary piece of the bus network redesign initiative that has strong support at a high level from GM Leslie Richards and Philadelphia Mayor Jim Kenney.