Sign our Free Transfers Petition to demand that SEPTA to end the $1 transfer penalty when the SEPTA board votes on fares next spring.

SEPTA leadership is still resisting calls from the Kenney administration's transportation team, and from within their own ranks, to eliminate the $1 transfer penalty.

In today's article from reporter Jason Laughlin, Mayor Kenney even echoed our message about the policy, saying “Our position remains the same. We want to see the transfer penalty removed, and the Pew report provides the data to back it up.”

Mayor Kenney is referring to a new study from Pew, which finds that high levels of job sprawl interact with the transfer penalty to make SEPTA's fares functionally some of the highest in the nation for lower-income Philadelphians. Because so many trips require a transfer, the "real" base fare for many people is often at least a dollar more than the official cash fare. 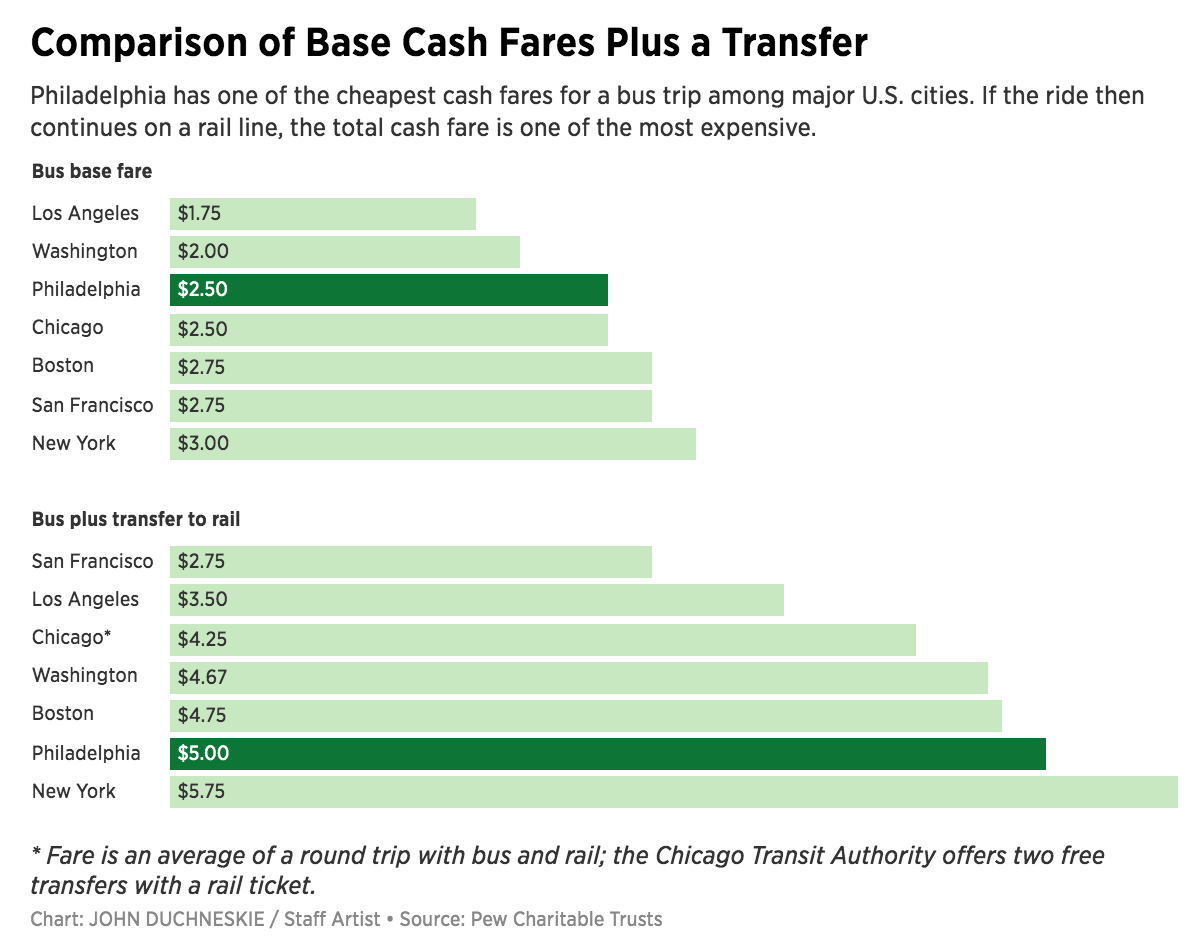 Not only is the transfer penalty an unfair and inequitable fare policy that arbitrarily charges some riders more who don't live on a one-seat ride from work or school, but it also suppresses transit ridership that SEPTA badly needs. One DVRPC study found that eliminating the transfer penalty could boost ridership by an estimated 11%.

Transit riders and advocates need to start making a lot of noise about this issue over the next year leading up to the vote at SEPTA's spring 2020 board meeting. You can help by signing our petition for free transfers and sharing it with neighbors and on social media.

Friday, July 26th, 8:30 - 10 am
Jessica Baumert of The Woodlands at Creative Mornings
Join CreativeMornings Philadelphia for their July speaker, Jessica Baumert, Executive Director of The Woodlands Cemetery, at the Center for Architecture + Design. She took over the organization in the fall of 2011, and has increased yearly visitorship to over 40,000 people, and has cultivated a renewed sense of community within the 54-acre necropolis.

Thursday, August 1, 5 pm - 6:30 pm
Try Out Philly’s New Voting Machines
Philadelphia is getting new voting machines this fall, and the Better Philadelphia Elections Coalition (which 5th Square is a part of) will be hosting an availability for anyone else interested in trying out the new machines. The machines will be set up in the lobby of the Graham Building at 30 S 15th Street.

Thursday, August 8th, 6 - 8 pm
Save the Date: 5th Square's August Monthly Meetup
5th Square's monthly meetups are on the second Thursday of each month, and are an opportunity for members and volunteers to connect, and for new people to get involved with our all-volunteer organization.  Save the date for the next meet-up on 8/8/19 featuring guest speaker State Rep. Donna Bullock. Location TBD, to be announced next week.

Throughout July and August
Public Spaces - Summer Workshop Series
Fairmount Park Conservancy in partnership with Philadelphia Parks and Recreation, the Free Library of Philadelphia, Philadelphia Parks Alliance, and the Knight Foundation, are offering the Public Spaces Summer Workshop Series. These exciting summer workshops are designed for community members and public space advocates and volunteers. Share ideas and build connections across parks, recreation centers, and libraries throughout the city.

Plans for improving the bicycling infrastructure along Spring Garden Street have been in the works for 10 years with little progress. In 2015, the City received an $800k grant for a preliminary design of this corridor with little to show publicly for it. PlanPhilly examines the history of work on this vital corridor and its slow progress to, one day, become a safer part of our cycling network.  We here at 5th Square believe the pace of progress to make this street safer to be unacceptably slow, and in that time, one bicycle courier was killed by a motorist along this route.

Philly Free streets is coming on August 3rd, and Philly voice has a comprehensive listing of times, activities and locations to get the most out of this special event.

Economists from the Federal Reserve Bank of Philadelphia calculate the economic damage that highways have done to American cities, contributing to suburbanization, the subsequent decline of U.S. cities during the 20th century, and the creation of barrier effects for public amenities like waterfronts. They found that between 1950 and 2010 highways slowed growth in income, population, and land values in city centers, while having the opposite effect in outlying areas. Highways also contributed to air and noise pollution, and reduced access between neighborhoods split by freeways. The paper cites the decline in quality of life “was an important factor in pushing people out of cities in the ’50s, ’60s and beyond.”

6ABC had a feature last week on Philadelphia's litter problem and our 'Filthadelphia' nickname. Philadelphia can solve this problem mostly by copying what many other cleaner cities are doing across the country: comprehensive curb-side street sweeping, a ban on plastic bags, and more public trash cans emptied more frequently.  6ABC's online poll their audience overwhelmingly agrees about the street sweeping issue!  Are you listening, Mayor Kenney? 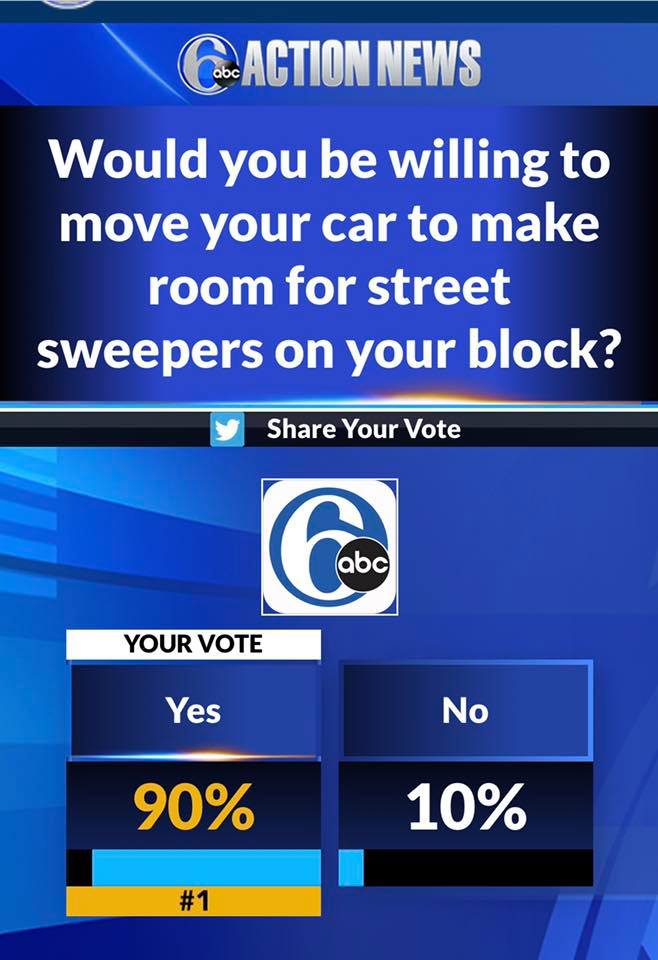 A new study from the Federal Reserve Bank of Philadelphia finds little evidence to support the conventional understanding of gentrification as a massively disruptive influence on the well-being of lower-income city residents.  The study found that the amount of displacement that seems attributable to gentrification is relatively small. In addition, the researchers found, some low-income “original residents,” and particularly children, remained in the neighborhood and benefited from the changing characteristics of the community. Read City Observatory's post for a summary of the findings and some takeaways for politics and policy.

Hidden City Philadelphia published an op-ed about how upzoning for greater density in older buildings can help address both our housing affordability and historic preservation problems.  Upzoning refers to changing zoning laws to make denser building legal. With enabling zoning and careful interior alteration, certain historic properties are excellent candidates for residential conversion projects.  This could make a big different in Philadelphia especially, by creating more opportunities to reuse old buildings that would otherwise sit vacant or be subject to demolition. Upzoning as a solution has come up most recently in West Philly with the attempted preservation of Good Shepard Church(soon going before the Zoning Board of Adjustment) and also in Grays Ferry with St. Gabriel Church.

Affordable Housing RFPs 2019 - The Division of Housing and Community Development (DHCD) has issued two Requests for Proposals. One is to preserve existing affordable multi-family rental developments. The other is to support new affordable rental housing. The attachments and exhibits apply to both RFPs.

The Garden Court Community Association (GCCA) in West Philly is seeking neighbors to get involved with their zoning committee. You can either sign up to be an "interested neighbor" (receive notice of all of our regular and public meetings, have the opportunity to vote on public items, and get occasional updates on issues the committee is dealing with) or apply to join the Committee, facilitating community input and advocating on its behalf when necessary.

Community Legal Services of Philadelphia is hiring for a variety of positions, including: Attorneys, Paralegals, Social Workers, and Secretaries.

The Tookany/Tacony-Frankford Watershed Partnership (TTF) is seeking a Communications Associate.

Character Lab is looking for a Research Partnerships Manager.

JMT is seeking a full-time Architectural Historian to assist in their growing Cultural Resource practice.

JLL, a professional services firm that specializes in real estate and investment management, is seeking a Research Analyst.

The Energy Foundation is seeking a Pennsylvania State Director