As reported by PhilyVoice and Philadelphia Inquirer, charges were dropped against the garbage truck driver that struck Emily Fredricks in 2017. When the case is cut and dry, like an impared driver, it makes sense that the driver should face consequences for their actions.

However, driver Jorge Fretts was paying attention to the road but did not signal. In this case, the consequences may not be as impactful or satisfactory. We should look to prevent these tragedies in the first place. For reckless or impaired driving, we can work on making public transit a better option or making communities walkable. Even calling someone a cab after a night of partying is a better alternative. And for those on the road, seeing overly complicated intersections or too many lanes with faded paint also causes problems. We can also examine and improve infrastructure that prioritizes safety of cyclists and pedestrians, and makes traversal for drivers less complicated. 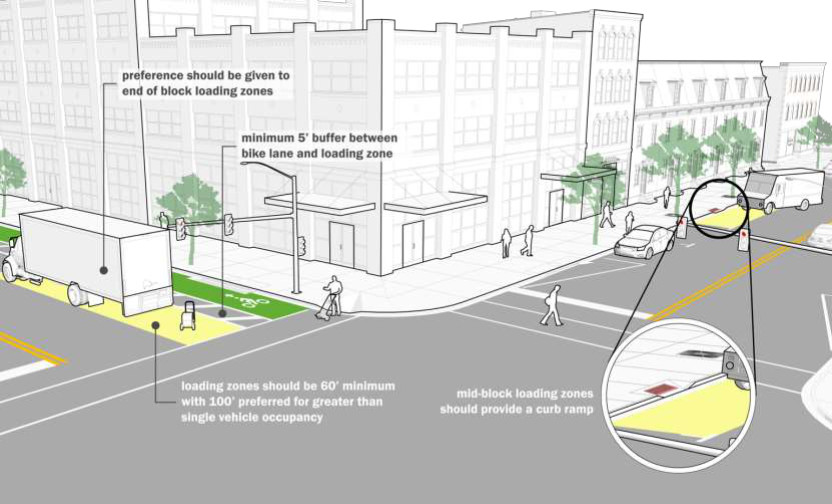 Mixing cargo with regular traffic will continue to be a problem. In this case, cargo can refer to delivery vehicles, garbage trucks, and others that are focused on carrying goods. The interaction of cargo and cyclists are fraught with hazards, but there is hope in mitigation strategies. Athena Contracting added shims to the sides of their garbage trucks to prevent a cyclist getting caught underneath and want to see this become the standard for all trucks. They also wanted the city to repeal the noise ordinance for garbage trucks to allow them to operate earlier in the day and prevent traffic or collisions. Michael Ruane from DVRPC thinks that cargo and bicycle collisions are more likely due to the increase in cargo vehicles on the road, and wants to see cargo being considered in Complete Streets analyses. The city may have to try lots of different configurations in order to get the best result, and that may not look the same for every street. Alison Conway from the City College of New York had some suggested street configurations and additions that would be worth trying.

Keeping the roads as they are is not working for anyone. This is why Washington Avenue was so important to 5th square - this is an overdue attempt to make it easier for everyone to use the roads. Vision Zero is not just an abstract metric, it is a committment to people like the family of Emily Fredricks to see that it never happens again.

Longtime 5th Square member Dave Brindley's tactical urbanist bike lane on the 3700 block of Spruce St in West Philly is now a sanctioned lane. Years ago, he was tired of friends' bike accidents and knew it was a dangerous block. He improvised a bike lane with stray traffic cones and it became a permanent fixture. The Inquirer first covered it in 2016, with stories of other cyclists that had difficulty with the lack of bike infrastructure.

Sometimes the best way to change things is to demonstrate what the change should be. There are many ways to do this, and putting down cones or paint is one way. In the article above, Michael Lydon gives advice in the Tactical Urbanism guide, suggesting to start small and working as a team. You could talk to your neighbors or committeeperson for help, or make connections at our meetups. There are also more official routes, like grants from DVRPC or other municipalities or regional groups. The improvements to the built environment might be slow, but it's not impossible. We can make our city safer one cone at a time!

Do you want to make a direct impact on the success of urbanist campaigns and candidates? Join us for 5th Square's monthly Marketing Committee meeting on September 13 at 7:00pm! Each second Tuesday of the month, we meet to:

No previous marketing experience is necessary, and all marketing disciplines are welcome!

Support our ongoing efforts for a more sustainable, walkable, and bicycle-friendly Philadelphia! Your donations go to promoting and informing urbanist issues and supporting candidates that support safety and equity.

The Inquirer and WHYY were at the Roosevelt Boulevard Subway Town Hall last Saturday, along with a good cross-section of neighborhood residents. The event was well attended, with a combined 130 people at the PATH Center and virtually. The consensus was that residents wanted to see some kind of rapid transit along Roosevelt, with the votes being split between a subway and elevated rail. Thanks to the panelists, Jared Solomon, and 5th Square volunteers for making this event happen.

From the Inquirer: “I realized early on there was a major transportation inequity in this section of the region,” said Arzu, 30, studying for a Ph.D. in urban and regional planning at the University of Pennsylvania. In short, he said, the Northeast isn’t well connected to the rest of the city by transit, and that holds back its growth and economic development.

From WHYY: Arzu said there would be a community advisory board and a sustained commitment to engage community members. “This wouldn’t be a slap on the wrist where they just come in, ‘Okay we spoke to five people we’re out of here.’” Arzu said. “No, we want to continue to work with people like yourself, and policy makers, to come to a consensus and move forward from there.”

If you missed out on the event, there is still more to come! Our petition is still ongoing. We will continue to update you with more info and next steps.

This webinar, featuring Joe Bernard and Douglass Smith, will present examples of two cities addressing racial inequity through their land use planning tools & codes. Deadline to register is September 6, 2022.

Registration fee is $60 and will go up $70 on Sept. 12. Cycle through the beautiful back roads and flat terrain of South Jersey along with a community of riders dedicated to changing the world for people with MS. $300 minimum for fundraising.

Take the Lane: a Right of Way reform agenda

StreetBoxPHL’s inaugural symposium will be featuring exciting Philadelphia public space stewards and advocates, and will explore the changes needed to make it easier to make great places out of small spaces in the right of way.

The 82 Alliance is hosting a half day Mobility Summit, featuring Stan Caldwell from the Traffic 21 Institute at Carnegie Mellon, and Jody Holton from Planning & Strategic Initiatives at SEPTA. Early bird tickets are $90 and are available until August 31st.

The Verge / To fight climate change, we need to start biking like the Dutch

WHYY / What happens when Philly council members resign to run for mayor?

Feet First Philly is partnering with the Department of Public Health to provide funding for mini-grants of $500 to $2000 to create public space enhancements and safety improvements where they are needed the most. Residents and community groups in low income communities and communities of color are strongly encouraged to apply. The deadline to apply is Tuesday, October 11th at 11:59PM.

Bicycle Coalition of Greater Philadelphia is looking for volunteers interested in helping us with this process between September 6 and October 28. Bike counts happen on weekday mornings and evening from 7:30 – 9:00 AM and from 4:30 – 6:00 PM, weather permitting. Sign up today!

Oonee / Chief of Staff to the CEO