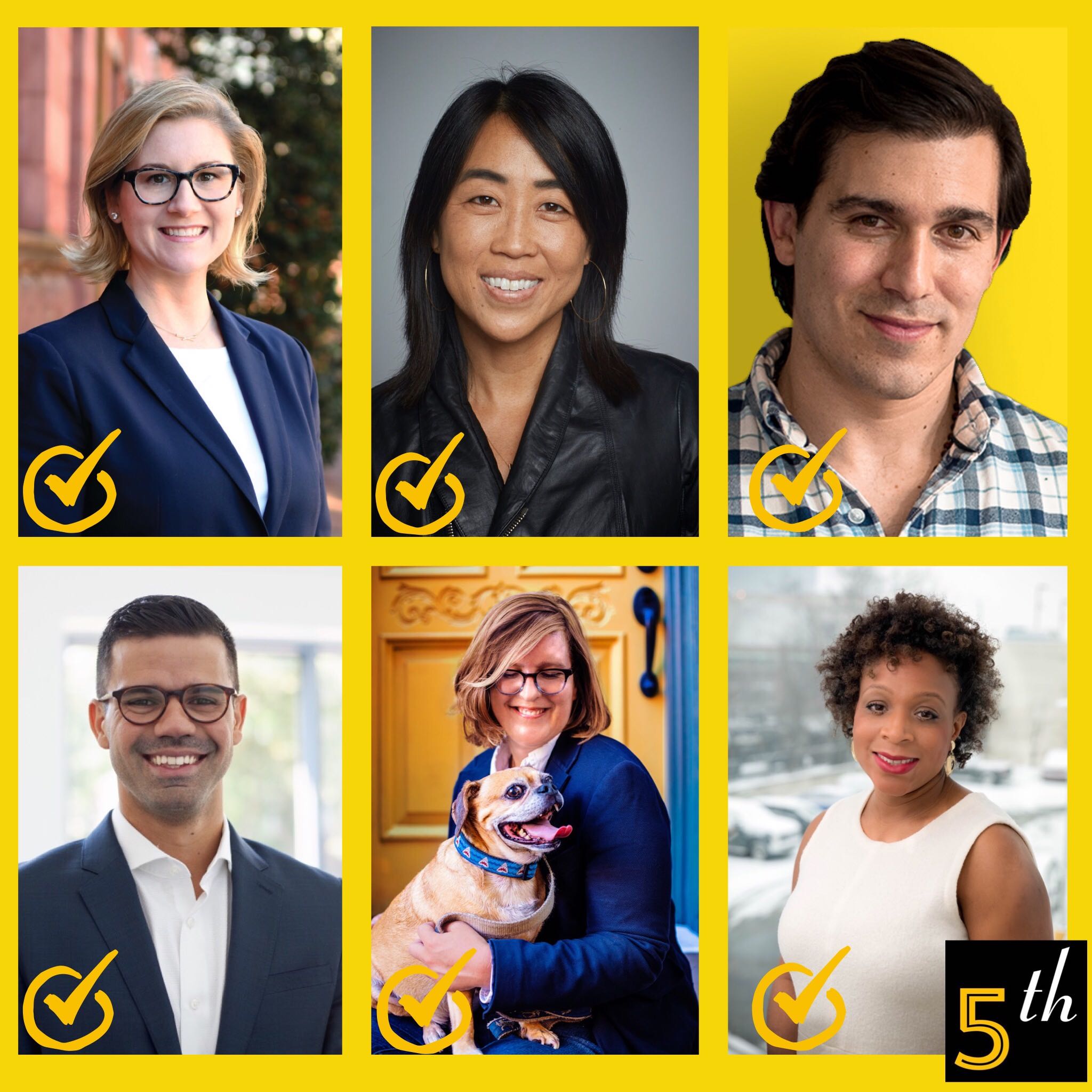 The 2019 City Council primaries are less than 3 months away and this is our best chance to elect a new City Council that will bring about a more accessible, equitable, and sustainable city!

5th Square made a first round of early endorsements last week, and we're proud to be supporting the following slate of candidates:

All City Council candidates have been invited to complete our 2019 questionnaire, and we'll be posting the candidatesd' responses as we receive them at our 2019 Election Center.

So much is at stake, and we need your help.

We have just 2 weeks left to help each candidate collect over 1,000 signatures to get on the May 21st primary ballot.

Can you help one of our endorsed candidates collect petition signatures? This is an easy way to help a candidate you like, and takes just one or two weekend afternoons. Sign up at the bottom of our 2019 Election Center page and check "Collect Petition Signatures for Candidates" and an organizer will reach out.

Or if you're interested in doing election volunteering that's more behind-the-scenes, sign up on our Organizing Committee page or email us at [email protected].

Wednesday, February 27th, 5:00 pm - 8:00 pm
Philadelphia Parks Alliance - George's Sendoff Celebration Happy Hour
Join the Parks Alliance in celebrating the hard work of our friend George Matysik, who's closing out a four-year chapter as their Executive Director. Friends, supporters, volunteers, and staff will be coming together at the Field House to raise a glass with George.

Wednesday, February 27th, 7:00 pm - 9:00 pm
At-Large Bingo! City Council Meet & Greet
Grassroots Advocacy for South Philadelphia is inviting all candidates for City Council At-Large to The Workshop at Bok to mingle with voters. Guests will receive a "bingo card" with all of the attending candidates - whomever is able to ask every candidate in attendance a question will have their cards entered into a drawing for prizes!

Omar Woodard, the GreenLight Fund Executive Director (and Bicycle Coalition board member) is running for the 5th District Council seat currently held by Darrell Clarke, reports Jake Blumgart. "That challenger, Omar Woodard, filed campaign paperwork on Feb. 22, and comes into the race with a large network of backers and experience in multiple political roles. The run for office will be a first for the 35-year-old North Philadelphia native. The district covers much of North Philadelphia, from Strawberry Mansion in the west to slices of Fishtown and Northern Liberties in the east. It also swoops down into Center City." Sign up to become a member and vote on 5th Square's endorsement in the 5th Council District.

PlanPhilly profiled our endorsed candidate for At-Large City Council, Justin DiBerardinis, and his policy platform which calls for both government reform and progressive economic policies, packaged as “a New Deal for Philadelphia.” Read Justin's answers to our 2019 questionnaire, and sign up to help his campaign with petitions.

2nd District Council candidate Lauren Vidas, who 5th Square endorsed last week, unveiled her policy agenda for government reform and affordable housing on her campaign website this week, calling for more renter protections, Community Land Trusts, and some other 5th Square priorities like changes to Councilmanic Prerogative and more transit-oriented development. Sign up to volunteer with Vidas and help her collect signatures to get on the ballot.

About 45 SEPTA projects are now on hold because of a misguided lawsuit from the trucking industry and the National Motorists Association, challenging the use of Turnpike toll revenue to fund transit. If the lawsuit is successful, a revenue stream for transit of about $450 million a year could disappear, and about 75% of that goes to SEPTA currently. "Construction that is underway is continuing, but design work on 21 projects has stopped. Those stalled include high-profile work such as the $1 billion plan to modernize the trolley network with new vehicles, a $59 million renovation of the transit hub beneath City Hall, and work on stations at Secane, Noble, Tasker-Morris, and Villanova. Purchasing for 16 other projects has also stopped."

Ryan Deto at Pittsburgh City Paper says it isn't the $450 million a year for transit that's bankrupting the Turnpike Commission, but the $6.9 billion they're spending widening the Turnpike and the Northeast extension.

District Attorney Larry Krasner filed criminal charges against the motorist who killed cyclist Emily Fredericks last year, including homicide by vehicle, involuntary manslaughter, and recklessly endangering another person. A new report from the Bicycle Coalition and Families for Safe Streets found that Philadelphia drivers are rarely prosecuted when they kill pedestrians or cyclists.

PlanPhilly examines the epidemic of illegal parking and blocked access to crosswalks and sidewalks in residential neighborhoods. The article looks at how city agencies pass the buck on issuing citations to these vehicles and why the PPA and police department have been reluctant to enforce this pedestrian safety issue.

The South Jersey Times Editorial Board writes about PATCO's recent commemoration of their 50th anniversary, and how the system has been keeping up with the times in all aspects except in its geographic reach.

Inga Saffron, reviews the Philadelphia Housing Authority's plans for Ridge Avenue adjacent to its new headquarters. She makes a cogent argument for density as a driver for neighborhood vitality: "The more people who live in an area, the more likely the neighborhood will be able to attract basic retail amenities like grocery stores and coffee shops. If enough of those small shops cluster together, they soon start to form the nucleus of a local business district." She also laments the anchor tenant, Save-A-Lot, in pushing their auto-focused suburban model onto this fledgling neighborhood.

Center City District published their 2019 Housing Report showing some interesting statistics, namely, “80% of all new housing units in Philadelphia are being built in either in Greater Center City or in one of the five adjacent ZIP codes, an area that comprises just 17% of the city’s geography.”

Our co-chair, Dena Ferrara Driscoll, was one of several education professionals recognized by Billy Penn in their article "Who's Next in Education," for her work as a grant and development specialist for the School District of Philadelphia.

ULI Philadelphia will celebrate transformational projects within the region with the 6th Annual Willard G. “Bill” Rouse Awards for Excellence. Apply to share your project with a national jury of experts. Finalists and winners are featured in local media. Deadline to apply is Monday, March 4th.

Knight Foundation is inviting nominations for the inaugural Knight Public Spaces Fellowship, intended to recognize leading civic innovators who have created or influenced great public spaces that have transformed communities across America. A small group of selected fellows will share up to $1 million in grants to continue their work. Nominations due March 22nd.

Rad Girls presents their 5th Annual Rad Awards, a ceremony and celebration honoring inspirational women leaders in the fields of technology, media, culture, and business. Accepting nominations which are due by March 15th, 2019.

The City released a Call for Artists/RFQ for a Percent for Art project at the Philadelphia Public Services Building at 400 N Broad Street. Deadline 3/6/19.

The City's Office of Transportation, Infrastructure, & Sustainability (OTIS) runs the Philly Free Streets initiative and put out an RFP for businesses to help expand the program. Due 2/27/19.

Young Involved Philadelphia (YIP) is hosting The Board Prep Program, a 7-week intensive training program supporting young professionals who are interested in being nonprofit board members - or who already serve on boards - and are seeking an education in thoughtful, engaged, and dedicated board service.

The City of Philadelphia's Dept of Commerce is seeking a Communications Director.