The Office of Transportation, Infrastructure, and Sustainability has released their first long-term vision for a major Philadelphia corridor, Roosevelt Boulevard! Read all about 5th Square's response here...

5th Square commends oTIS for completing the draft short-term and long-term plans for “Route for Change”, the initiative to rethink and transform Roosevelt Boulevard into a safe, accessible, and reliable arterial for its users. The project is truly pivotal, as this signifies the first major instance where oTIS has been tasked with envisioning a specific long-term plan. With the Boulevard claiming nearly 15% of total pedestrian deaths in Philadelphia this year, a significant reduction of both traffic speed and surface volume is desperately needed if the city is ever going to reach Vision Zero in twelve years (2030).

We agree with the Bicycle Coalition’s statement that the proposed bike lane improvements on Roosevelt Boulevard itself do not go far enough. While connectivity through intersecting streets is important, crossing the road will continue to be subpar until protected facilities, at minimum, are added at deadly intersections. And with its twelve lanes of traffic, the time is now to consider a protected bike lane along significant sections of the Boulevard, both to analyze traffic impacts and measure the reduction in fatalities. As BCGP mentioned, a similar intervention on Queens Boulevard decreased pedestrian deaths by a whopping 63% in only one year. As Roosevelt Boulevard is a PennDOT-controlled road, all it takes is a concerted, principled effort from public servants in order for substantial change to take place. Every additional death here is a poignant reminder of that. 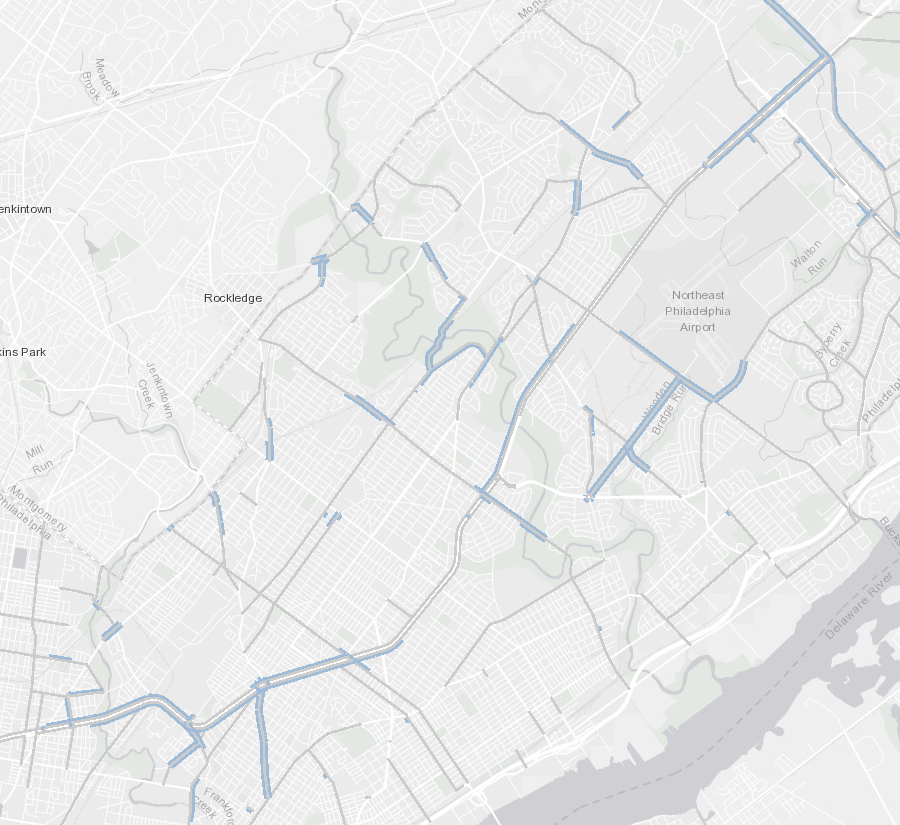 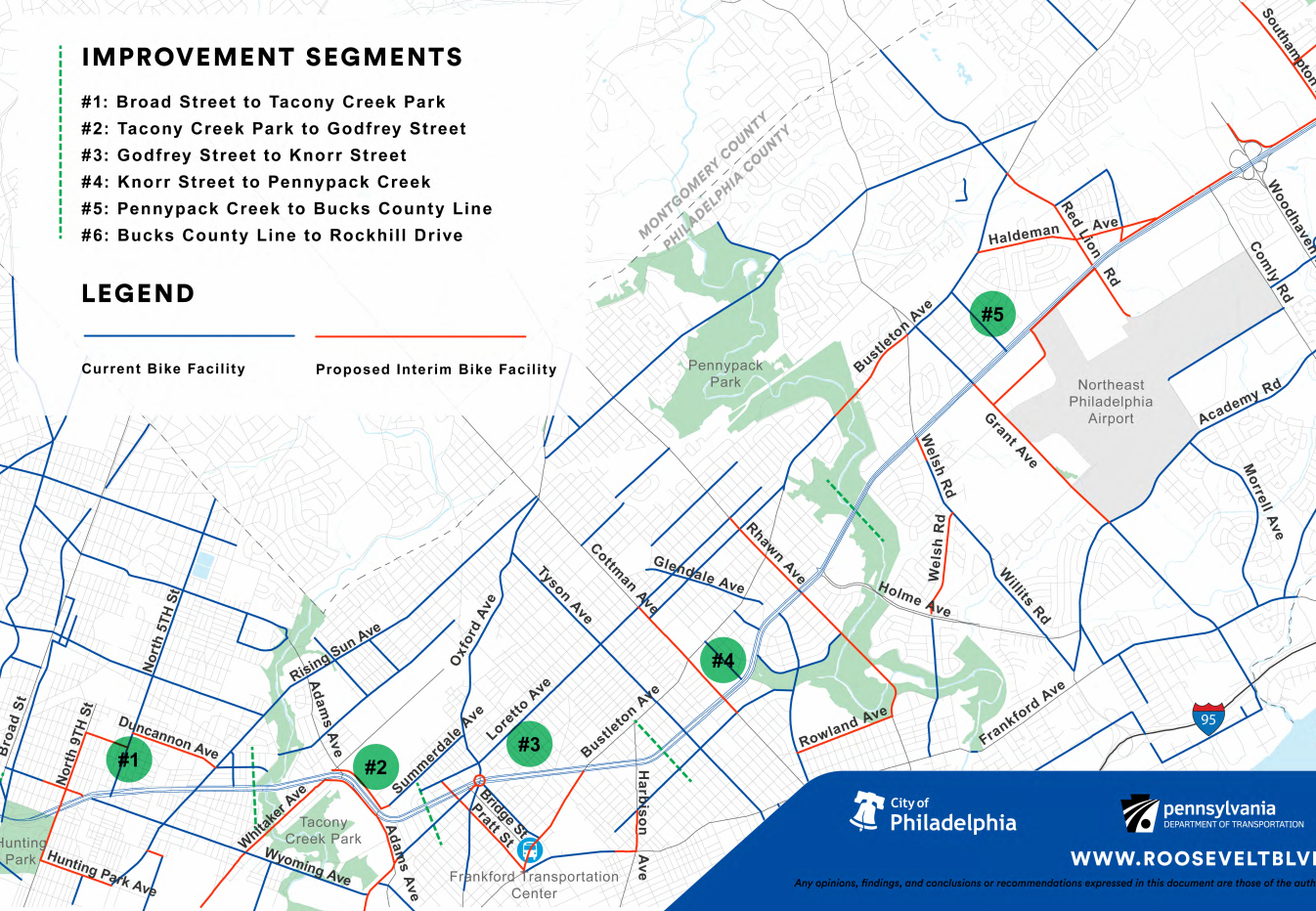 There are essentially two structural alternatives proposed in the long-term vision: the vision for a submerged express lanes highway with local/transit-only surface use, and a more modest vision for maintained surface express lanes with curb parking (with either light rail or BRT). Although the two visions are presented as equal, the first is clearly far more aspirational and requires more capital input. We believe that the first alternative should be OTIS’ long-term priority for several reasons.

With exception of the I-95 riverwards, Roosevelt Boulevard is the only major arterial for Northeast Philadelphia, and is considered a crucial part of the U.S. Highway network. 5th Square recognizes that a potential lane reduction to a level significant enough to truly make pedestrians safe is far too low for political support and regulatory approval. Thus, the best option to reduce the number of dangerous surface lanes to 4 or fewer, remove speeding cars from the surface, and facilitate regional express traffic is to pursue a highway. It is the only feasible way to advance the City’s Vision Zero pledge, and is the only hope at reducing traffic deaths to zero. Although a totally grade separated highway, in line with the Vine Street Expressway, carries a huge cost, Philadelphia does not have to shoulder it alone. Various federal grants, including the National Highway Performance Program and Surface Transportation Block Grant program offer the opportunity for PennDOT to construct a four-lane submerged highway.

However, it is absolutely critical that a reserved space in the highway for rapid transit be inherently included in the vision. Past visions of the Boulevard always intended for both a grade-separated heavy transit and highway to work in tandem, because this would allow the city to shoulder the high cost of a new Boulevard subway. Failure to include this in a vision reflecting the best-case scenario would result in a job half-done, and signify a vote of no confidence in a future Northeast Philadelphia as a dense, connected urban ecosystem better integrated with the greater city, betraying the vision statement. Certainly, there is not a lack of space in the 250-feet-wide right-of-way to automatically preclude this option.

We hope that the shift in perspective gained by oTIS in this decades-long plan can enable them in all cases to plan beyond the mere purposes of short-term, achievable gains. And we hope that oTIS can gain the authority and the ability to regularly communicate these ideas and updates to the greater public, because that is the only way a popular consensus on implementing that vision can be achieved. Ed Bacon, more than any other Philadelphia planner, wrote about the power of the design-idea to facilitate not only ambition, but real public-private cooperation, “a creation of neither the community nor the designer, but the product of the interaction of each”. For the sake of the Route for Change vision statement, Roosevelt Boulevard must offer a ”diverse and connected network of transportation choices” for this increasingly diverse area of the city. 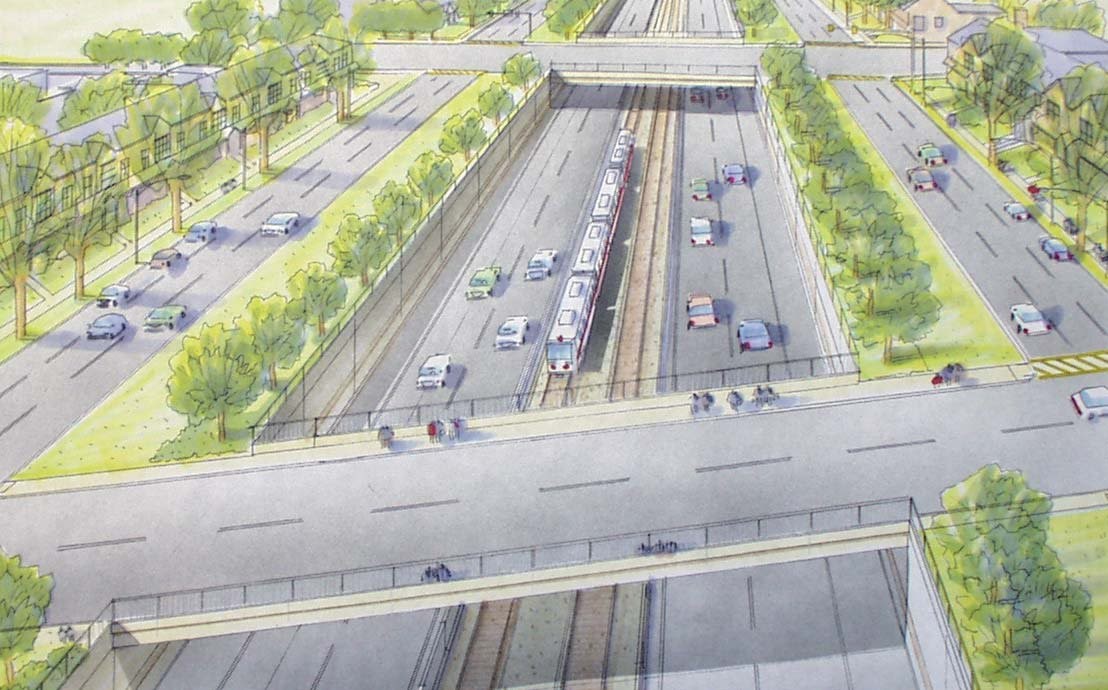 Vision from 2003 Roosevelt Boulevard Corridor Study, showing how a subway line can interact with a submerged highway

If you have any comments or ideas to send to oTIS, you can find the presentation materials here, and send a comment to [email protected] before December 28.