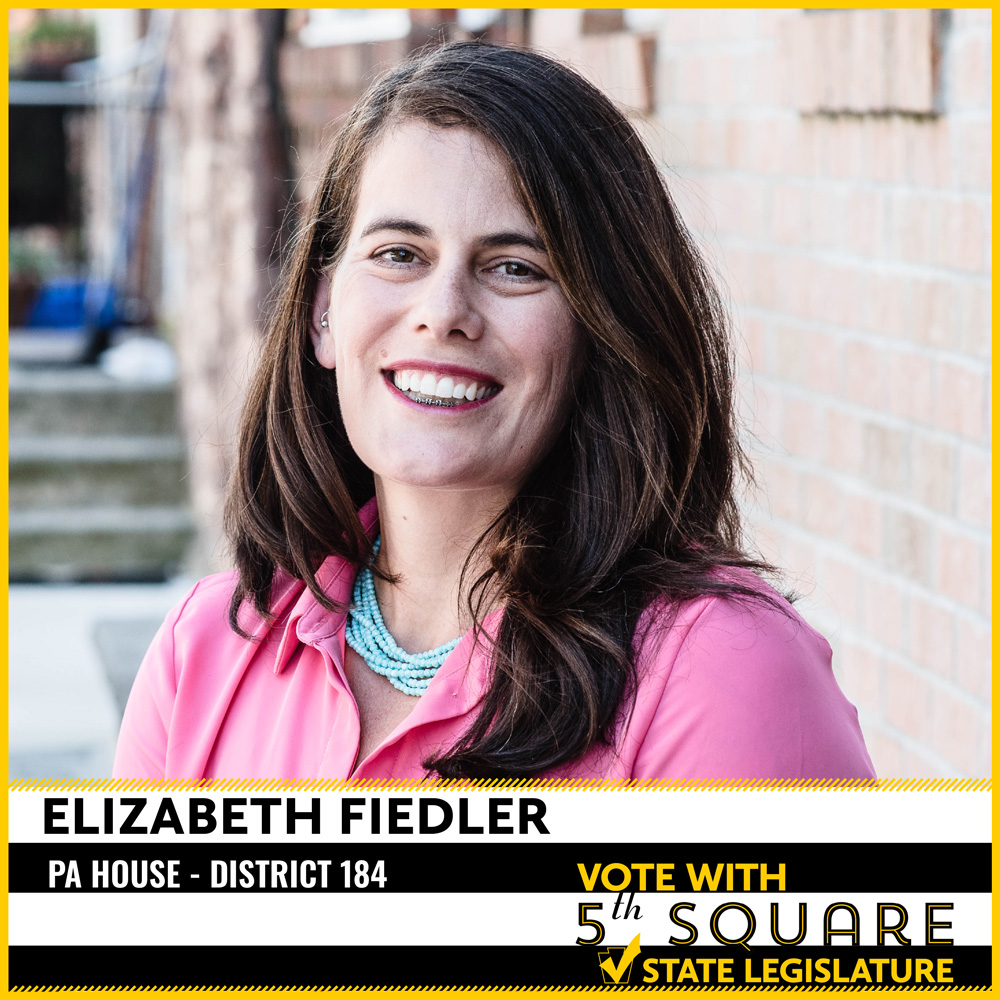 I am the mom of two young children, a strong supporter of public education and a strong advocate for making our streets safe for everyone, and for investing in public space including parks. As an individual and with my family I often travel by foot or by bus. We need to make our streets safer for everyone. A lot of my close friends commute by bike, as I did for 15 years, so I am well aware of the benefits and challenges. I am a strong advocate for safer streets and am committed to doing everything I can to make safety a reality for everyone in Philly and Pa. One of those steps must include sufficient and reliable funding for SEPTA.

Yes, I will continue to use my position to support advocates' calls for safer urban arterials. Specifically, we need to see PennDot embrace Vision Zero’s goal of eliminating traffic deaths and serious injuries and adopt an approach focused on the movement of people -- in all the ways they traverse our city including foot, bike, public transit and car. PennDot’s investments in multimodal infrastructure, coordination with local agencies and speed cameras on Roosevelt Blvd are all good steps. But to truly ensure we are doing everything we can to protect the lives of people in Philadelphia, we need to do more. As mentioned in the article, Philadelphians are six times more likely to be killed or severely injured on a PennDot street. This is a serious problem and it needs serious action.

We need a shift in the state transportation budget to invest in cleaner ways of traveling our city and a renewed focus on creating homes and jobs in walkable locations, along with a fundamental shift in priorities -- starting by making PennDot’s office itself more accessible.

Yes, and I support having revenues that are generated from the cameras go to funding transportation safety projects. It's unacceptable for nearly 100 people to be killed on our streets every year. That number should be zero.

Yes, we need to give local police the tools they need to enforce the law so we can save lives. In addition, using this technology will assist in reducing human and mechanical error when recording drivers' speeds. It is important that this legislation be carefully worded to reduce any potential for misuse.

I support the Governor's proposal to implement a fee on municipalities that rely solely on State Police. This is fair and will allow us to appropriately fund Pa's transportation projects.

I support increased and reliable funding for SEPTA, a comprehensive bus network redesign, free SEPTA rides for children under 12, dedicated road space for buses and trolleys, making major arteries safer for everyone (pedestrians, public transit riders, drivers, cyclists) expanding high frequency rapid transit and the investment in more homes and jobs near public transit routes. All of these steps would make a big difference in the lives of people in South Philadelphia.

Reliable and sufficient funding for SEPTA is vital not just to individual people’s lives, but also to our region and state’s economy. We need to put in place policies that facilitate and encourage more transit ridership, and that create sustainable revenue streams through big picture tax reforms: repealing the uniformity clause (legislation I have introduced and championed in the House) and closing the Delaware loophole. This will allow us to bring in increased revenue from big corporations and the very richest Pennsylvanians so we can invest enough in dedicated transit funding.

Many people in South Philadelphia rely on mass transit to get to work, school, childcare, doctor’s appointments and second jobs. I strongly believe we need to invest more in our public transit, make the SEPTA Key card easier to use, and reduce the cost of using mass transit for working and poor people and children. I am a strong supporter of bringing in more revenue by repealing the uniformity clause, closing the Delaware loophole and other tax changes that will get the very rich to pay their fair share, without increasing the burden on working people.

We need to invest more money in our public transit system, review the existing bus network to ensure it makes the most sense for moving people to the locations they need to get to, and increase community input and participation in that process.

☐ Yes
☐ No
☒ Other: I strongly support zoning to allow for denser development and for housing near public transit. As we know, in Harrisburg, preemption is often used to limit the ability of local (elected) officials to act and to govern themselves. Specifically, it is often used negatively toward Philadelphia. I believe we must thoroughly look into this option and look into its success and struggles elsewhere. I look forward to talking more about how we can facilitate more housing, close to transit, and make sure our neighborhoods are affordable.

☐ Yes
☐ No
☒ Other: See below.

Reform of the Separations Act is needed to more efficiently invest tax dollars in public projects. Allowing for Design-Build contracts in other states has had mixed results and requires a level of project oversight that we would need to ensure the Commonwealth and municipal agencies are prepared to provide. Every public works project should require general contractors adhere to strict prevailing wages, and minority participation requirements for general contractors and sub-contractors. We should work toward the goal of having every worker on public projects be unionized.

As a legislator and as an individual (commuter, mother, neighbor), I am 100% committed to doing everything I can to make it as easy and as safe as possible to traverse our city. I am committed to working with community members and with advocates to this end. I am also committed to making sure that the cost of paying for increased public transit is not put on the backs of working and poor people but instead must be paid by the very wealthiest and by the big corporations that are currently not paying their fair share because of things like the Delaware Loophole.

In just over 1 year in office, I have worked hard to build relationships with lawmakers from across the state and across the aisle, and have had many Republicans sign on to support legislation I have introduced. I am committed to continuing to build those relationships with the goal of building a state budget that reflects all our needs and that prioritizes at a minimum: ensuring we can all live without fear of being injured or killed while trying to get to work, school, the store or daycare.