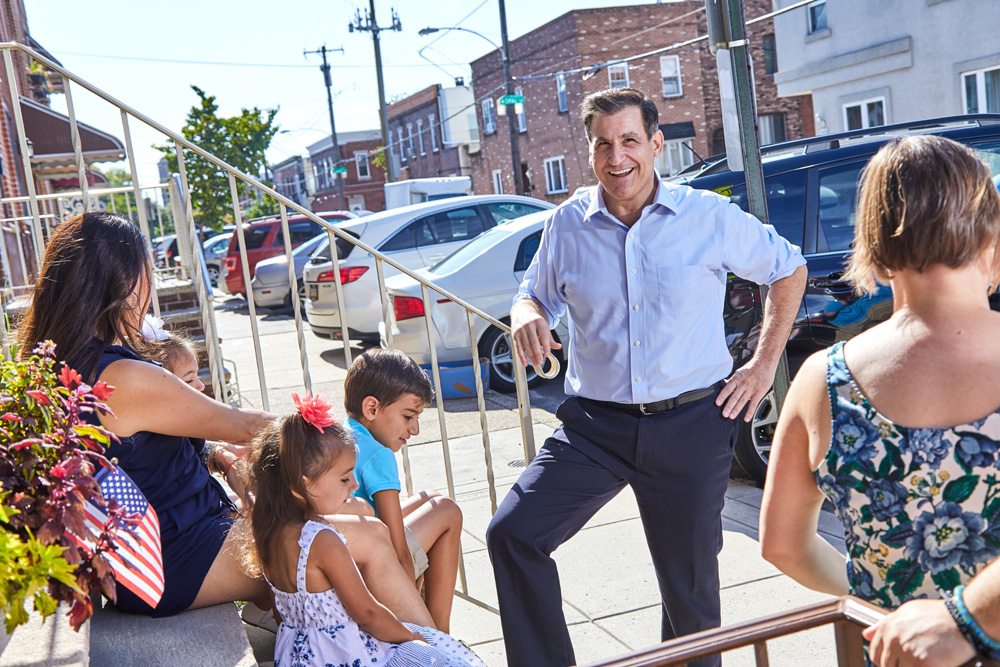 I was born in Drexel Hill, my grandfather, Andrew M. Farnese, served as president of the Philadelphia Board of Education and chairman of the Philadelphia Gas Commission. I received a Juris Doctor from Temple University School of Law in 1994, after earning my Bachelor’s degree at Villanova University. After being admitted to the bar in both Pennsylvania and New Jersey.

In 2006, I challenged 10-term incumbent Babette Josephs in the Democratic primary for the 182nd District in the State House, losing by just 237 votes.

In 2008, following the retirement of Vince Fumo, I ran for the Pennsylvania Senate in the 1st District, against union leader Johnny Dougherty and community activist Anne Dicker. This time I won the election with 43%, receiving 30,879 votes. In that year, I faced Republican Republican businessman Jack Morley, who I beat by a margin of 81%-19%. And have proudly served as the State Senator for the first district for the past decade.

Yes, I would use my position to support the advocates’ call for safer urban arterials. I have been working with pedestrian and bicycle advocates to allow for the construction of parking-protected bike lanes on state roads using state funding. The bill passed the Senate Transportation Committee unanimously on February 5, 2020.

The key to getting more of these measures passed is for advocates to meet with state legislators, the City Streets Department, and PennDOT to define what is needed, how we can fund it, and what we need to do to implement it.

I support giving the city of Philadelphia and other municipalities more tools to enforce congestion-related policies and ordinances that improve residents’ quality of life.

We can do a couple of things. We can pass my legislation to create parking-protected bike lanes on state roads and to use state funding to enhance bicyclist and pedestrian safety. Creating these safer bike lanes will encourage more people to bike which enhances mobility and prince safety and reduce congestion. I also support the installation of more countdown clocks so more pedestrians can safely cross streets and intersections. I am also in favor of redesigning high volume intersections to make sure we are using the best technology and materials to enhance pedestrian and bicyclist safety.

Other issues that we should consider and are supported by mass transit agencies include:

We could monetize the SB 778 revenue to create bonds to fund more mass transit capital projects.

We need to look at statewide zoning laws to consider putting housing near public transit sites. This will encourage people to take public transit, boosting ridership, and revenues for transit agencies.

Yes, I support dedicated transit lanes as long as they improve traffic flow and safety. I would support automated transit lane enforcement so we use advances in technology to improve safety.

Yes, I could support these initiatives. I would like to see pilot programs set up before full implementation to make sure that the initiatives have their intended effect of limiting congestion and improving safety for pedestrians and bicyclists. These initiatives will also require significant public input, discussion and coordination with PennDOT, SEPTA, the City of Philadelphia, RCOs and citizens.

I would set up meetings with SEPTA GM Leslie Richards, PennDOT, the City Managing Director and others to discuss this issue, to form a consensus, develop coalitions to push these necessary changes.

I rely on constituent input and the input of RCOs. My office staff and I keep in regular communications with my constituents on their transportation needs. That is why I am fighting for the passage of Senate Bill 565 to create and enhance the ability to construct more parking-protected bike lanes in Philadelphia and the first senatorial district.

This legislation has failed twice in the California state senate. We need to study why it failed to ensure that it does not face a similar fate in PA. I would also like to work with SEPTA and PennDOT leadership to ensure that this legislation will help grow revenue and ridership for SEPTA in a comprehensive and strategic manner.

I have seen data and studies from the PA Department of Labor and Industry and other groups that the separations act is a benefit for the residents of Pennsylvania. In order to consider supporting the repeal of the separations act, I would need to see hard data that shows that it would benefit taxpayers, create quality construction projects, and would not harm the skilled and hard working members of organized labor.

I support Governor Wolf’s proposal to have Pennsylvania join the multi-state regional carbon cap and trade program called the Regional Greenhouse Gas Initiative (RGGI). Republicans and their special interest supporters in the fossil fuel industry are going to fight this proposal and we have to fight back. This is a way for us to join our neighboring states in the Northeast and Mid-Atlantic to address Climate Change in PA.

I have also co-sponsored Senate Bill 600 that would require 30% of all energy produced in PA to come from renewable sources by 2030.

By moving away from fossil fuels and into large scale renewable energy production, we can help to address climate change in a substantial way. I also recently voted against HB 1100 that would provide a $450 million tax credit for the building of a cracker plant in Northeastern PA. We do not need to build or provide state money to build more cracker plants.

We can get cars off the road and their associated greenhouse gas pollution by adopting forward-thinking transportation bills. The Senate transportation committee also recently passed my bill to create parking-protected bike lanes. When this bill is passed by the General Assembly, it will ensure that city’s can use state funding to create parking-protected bike lanes, which will create more safe spaces for cyclists and encourage people to get rid of their cars and to use bicycles.

I am the person to advance the urbanism movements goals politically and substantively because I have been doing the work for many years. I supported the use of speed cameras in Philadelphia and in active work zones, I support the use of municipal police radar and other technologies to control speeding and increase safety, and I am the lead sponsor of legislation to create more parking-protected bike lanes.