Last month, Philadelphia’s Office of Transportation, Infrastructure and Sustainability released their Route for Change report for Roosevelt Boulevard, a 290-page document with 17 appendices that details current conditions and future planning for the 12-mile long arterial road. Spanning over five years and 18 community meetings in the making, the plan is the single largest Vision Zero initiative to date, dedicated to the city’s deadliest roadway accounting for 14% of all fatal traffic deaths citywide.

The Boulevard, which serves over 500,000 people living in Northeast Philadelphia, has for far too long been a debilitating barrier and death trap, both for drivers who must handle bewildering traffic patterns and for pedestrians crossing its twelve lanes on a daily basis. At its widest point at Large Street, the crossing length is 410 feet long, greater than the length of a football field.

Initial interventions to the Boulevard have already proven effective: after a protracted years-long effort, including heartbreaking advocacy from relatives of traffic victims, 32 speed cameras were finally activated last June. Immediately after, speeding violations plummeted 93%, and traffic crashes on Roosevelt Boulevard had their single largest decrease in 2020, despite fatalities everywhere else in Philadelphia spiking 78%.

The Route for Change initiatives build upon this successful speed camera pilot through two phases of engineering and design improvements. First, projects scheduled for 2025 include longer 120-second walk cycles, shortened crossing lengths with realignments and curb extensions, filling in missing sidewalks in the Far Northeast, upgrading the bicycle network around the Boulevard, and most notably, adding bus lanes for the Boulevard Direct express service. 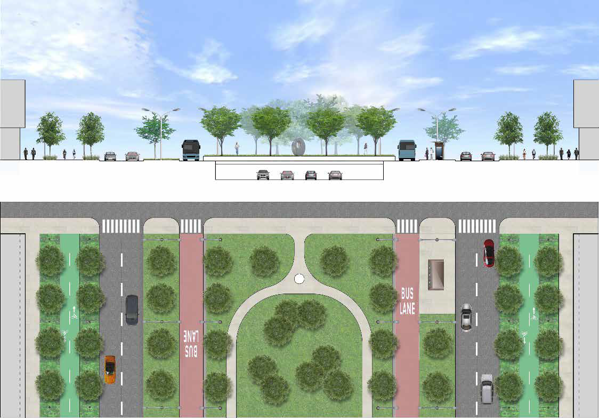 But while the 2025 projects merely tinker around the Boulevard’s fundamentally auto-oriented character, the 2040 alternatives are what propel this study into a truly visionary and restorative work. These plans see the number of car travel lanes reduced to a much farther extent, reallocating space for pedestrians, bus riders, and cyclists through broad park medians and dedicated lanes. At the same time, in one scenario, the Boulevard would now be home to a grade-separated expressway from Broad Street to Northeast Philadelphia Airport, making traffic conditions simpler and safer for drivers as well with fewer lanes needed.

It would be remiss to not also note the rapidly changing context that Roosevelt Boulevard now finds itself in. Decades after becoming Philadelphia’s frontier for postwar urban expansion, Northeast Philadelphia is now home to a rapidly diversifying immigrant population, with a full third of residents near the corridor speaking a primary language other than English. These changing demographics occur along with a growing population less likely to own a car, and yet need to travel to an increasing number of dispersed reverse-commute work locations. With a changing Boulevard, densification of its car-dominated shopping centers for mixed-use transit-oriented centers, as called for in the plan is the best way for immigrants and newcomers to grow and prosper in the years ahead.

The prospect of such transformative change is why it’s strange that the greatest what-if of Northeast Philadelphia planning is missing here: a Roosevelt Boulevard subway. Such a line could easily be accommodated for in the generous width of the capped expressway alternative, and be largely paid for by Federal highway grants poised for expansion by the upcoming infrastructure bill in Washington. Past studies found that ridership could easily reach 127,000 per day, which still rings true today if the transit-oriented development is built and feeder bus lines as found on the Broad Street and Market-Frankford lines are established. If the city is serious about stemming the flow of cars down the Boulevard, then more now than ever, Northeast Philadelphia needs it sone-seat rapid transit subway to Center City. Subway notwithstanding, Route for Change is a monumental landmark for the City, and is poised to bring a major win to the city’s Vision Zero initiative, which has seen nothing but stagnation since introduced by Mayor Kenney in 2017. The days of a Roosevelt Boulevard’s status twelve lane traffic sewer may soon be over, but only if future administrations stay true to the plan’s goals and vision for decades to come.