A protected bike lane could be coming to 22nd Street in Center City, but only if you show up to support it!

22nd Street is one of the most popular bike routes in Philadelphia. Over the last few years, it has suffered from potholes, faded paint, and truck loading in the bicycle lane.  As part of the resurfacing planned this summer, OTIS is proposing safety improvements like adding protective posts and moving the bike lane to the left side to minimize the risk of crashes from vehicles making right turns into bicyclists.

Come to the meeting next Monday, 6 pm at Greenfield Elementary School, and help the City connect this important piece of Philadelphia's downtown bike network.

We're having a party in the Concourse to raise funds for 5th Square's 2019 candidate slate! Get your tickets for our Dance Party Fundraiser at the Concourse Dance Bar on March 28th. RSVP today. 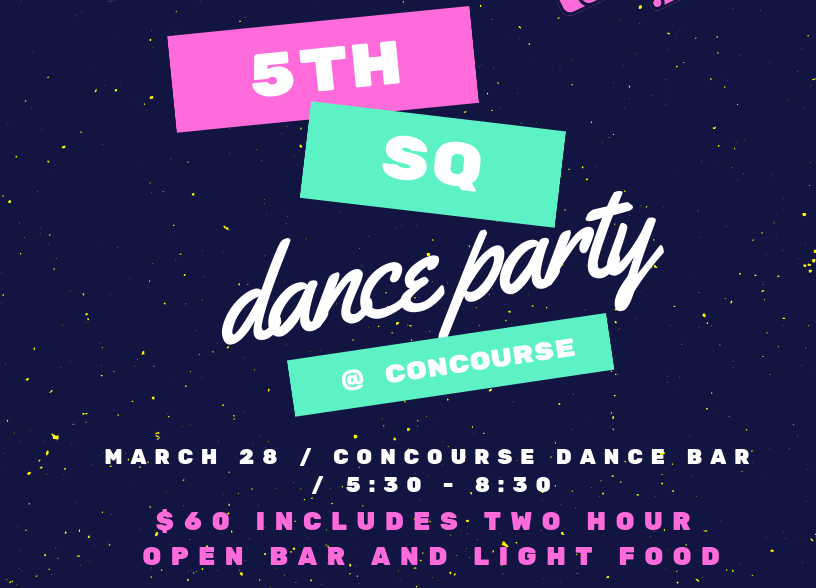 Can't dance? Don't worry, neither can we! This unique venue is in the space of the old Turf Club at 1635 Market St and is worth checking out on its own, and this is a great opportunity to help support the urbanist candidates we need to win their elections this May if we want to turn the tide in City Council on transit, biking, streets, and housing policy.

$60 admission includes two-hour open bar, food, and of course, the ball pit. Kids are welcome, and the venue is ADA accessible. All proceeds support 5th Square's Get Out the Vote efforts and direct candidate support. RSVP.

Friday, March 15, 12 - 2:30 pm
Climate Change Rally at Love Park
Love Park will be home to Philly's location for the US Youth Climate Strike happening this Friday.

Saturday, March 16, 1 - 4 pm
How Clean is Our Watershed? by WHYY
Join WHYY's Energy and Environment Reporter Susan Phillips and a panel of experts to learn how the Delaware River watershed has improved over the last 40 years and what issues we face in the future.

Monday, March 18, 6 - 7:30 pm
*** 22nd Street Protected Bike Lane Open House ***
The City is proposing a protected bike lane on 22nd Street for much of Center City, and other safety improvements along this route.  We need you to come to help us advocate for its existence!

Tuesday, March 19, 6:00 pm - 8:00 pm
Event in Support of Eryn Santamoor at Voyeur
Join Eryn Santamoor (a 5th Square Endorsed Candidate) for a fundraiser at Voyeur Nightclub to support her campaign running for an At-Large seat on Philadelphia City Council.

Sunday, March 31, 4:30 pm - 6:30 pm
Reception at The Gables for Jamie Gauthier
Join Jamie Gauthier (a 5th Square Endorsed Candidate) for a fundraiser at The Gables to support her campaign running for Philadelphia City Council in the 3rd District. Co-hosts include Alex Doty and Sarah Clark Stuart, the former and current Executive Directors of the Bicycle Coalition, as well as Erica Atwood, Ryan Spak, and Joe Khan/Second Generation PAC.

Take the Pennsylvania's State Transportation Commission's latest survey and let the Commonwealth know that pedestrians, cyclists and transit riders should be high on their priority list!

It's not just the Turnpike Lawsuit that's threatening transportation funding in Pennsylvania. The Pennsylvania Capital-Star looks at all the other factors affecting PA's transportation funding: including the State Police, the decline of gas tax revenue, and the insolvency of the federal Highway Trust Fund. We need to hear from Governor Wolf and state legislators about their plans to hold the line to stop any transit funding cuts going forward.

OTIS is running a series of upcoming open house meetings about protected bike lanes in three different neighborhoods. The first meeting is next Monday about the protected bike lane for 22nd Street. In addition, there are some recently posted fact sheets for two other corridors including the wide section of 11th Street from Bainbridge to Reed, and Germantown Ave from Master to 2nd Streets in South Kensington and Northern Liberties. Both of these projects include two-way protected bikeways! We'll be sharing info about these meetings as they're posted.

Our lack of wheelchair-accessible housing is a big problem in Philadelphia. The Inquirer recently chronicled the struggles of one South Philly family dealing with their hunt for housing to accommodate their wheelchair-bound 18-year-old. "Philadelphia’s old and narrow housing stock doesn’t always lend itself to accessibility, especially not at prices working famlies can afford. The Philadelphia Housing Authority said that the waiting time for fully accessible public housing varies by the number of bedrooms. In almost all cases, they said, the wait time is no longer than three years." We also need a bigger conversation about how to achieve more "visitable" housing that people who use wheelchairs can access.

At Strong Towns, Joshua Vincent writes about the success of land value taxes in several Pennsylvania cities as an alternative to traditional property taxes, or incentives like the 10-year tax abatement, TIFs, and KOZs. "Land is something that can’t be shipped to the Caymans or Texas. This makes it a unique revenue-raising system for government, in comparison to other programs that require not much more than faith and excitable supplicants. Subsidies, abatements, TIFs, and “opportunity zones” are inexplicably popular, and results are vague and scattershot.  LVT is not temporary, does not confer favor for a few, and doesn’t disrespect those longtime businesses and citizens that always kept the faith (and their capital) in their hometown."

Trend to watch: Co-housing is coming to Philly as Quarters, the fastest-growing co-living company, is coming to Northern Liberties next to the Piazza at Schmidt's. This co-living concept has taken hold in cities like New York and Seattle and provide a more affordable option to traditional apartment housing (think adult dorms). At 186 residential units spread across 74 shared apartments, the Northern Liberties building will be Quarters' largest in the U.S. when it is completed.

Society Hill Civic Association is seeking Board members. The election is May 15 at the general membership meeting. To nominate yourself or a neighbor submit a petition signed by 10 residents. Submissions must be made by March 30 to [email protected].

Center City Residents’ Association is looking to fill several Board seats for our fiscal year beginning July 1, 2019.  Board members generally serve a term of 3 years. Interested members are encouraged to forward a resume or summary of qualifications as soon as practicable to: CCRA; 1900 Market St., 8th Fl.; Phila., PA 19103 or by email:  [email protected], with "Board Candidate" in the subject line.

Passyunk Square Civic Association is seeking nominations for its Board of Directors. Nominations are due by 11:59 pm on Sunday, March 24.

Cedar Park Neighbors is seeking nominations for its Board of Directors.

Rad Girls presents their 5th Annual Rad Awards, a ceremony and celebration honoring inspirational women leaders in the fields of technology, media, culture, and business. Accepting nominations which are due by March 15th, 2019

The City of Philadelphia seeks a Program Manager to perform programmatic administrative analysis and legislative and regulatory affairs advisory work for the Office of Transportation, Infrastructure and Sustainability (OTIS)

TransitCenter is seeking qualified candidates for a brand new Director of Advocacy position in its national office, based in New York City. Due 3/15.

McCormick Taylor, Inc., the transportation engineering and environmental planning firm, has an immediate opening for a Planning and Communications Group Leader in its Philadelphia office