Petition: We need a Protected Bike Lane for Lombard Street

Tell Councilmember Johnson and The Philadelphia School that we need a protected bicycle lane for Lombard Street.

Lombard Street from 22nd to 27th Streets in Center City is a heavily-traveled route for pedestrians, cyclists, and motorists.  It is also the primary means for people on bicycles to access the South Street Bridge to University City and the Schuylkill River Trail.  The South Street Bridge has the greatest amount of pedestrian and bicycle traffic in Pennsylvania.  A bicycle count in 2017 saw about 4,000 people riding bicycles on this stretch of Lombard Street on a weekly basis.  This vital cycling route deserves protections from motor vehicles that drive, park, and stop along this stretch.

The City is currently repaving this stretch of Lombard Street.  During this paving project, we have a small window of opportunity to make critical safety improvements for all who use Lombard St.  It is imperative that we act now!

The last round of street safety improvements saw protected bicycle lanes for South Street and for one block of 27th Street.  The originally-proposed protections along Lombard Street were shot down due to objections from Councilmember Kenyatta Johnson.

Additionally compounding this issue, on Lombard St. west of 25th St., The private Philadelphia School stops its buses on the unprotected bicycle lane every day during the academic year.  These school buses can be found sitting and idling in these lanes for hours at a time, even during peak travel times for this street.

The City, the School District of Philadelphia, the Fitler Square Neighborhood Association, and local residents have all tried to work with the school to resolve this issue and move these buses to a space that would not jeopardize road users, however, we have not seen any change put into practice.  We know of at least one incident in the spring of 2019 where a cyclist was injured and required hospitalization due to the presence of these buses in the bicycle travel lanes.

In addition to our appeal to Councilmember Johnson, we are asking the Philadelphia School to be a good neighbor and enact a plan for its buses that will no longer endanger the neighborhood and the many users of Lombard Street.

2017 proposal from the City to adjust the Philadelphia School's bus loading off of Lombard Street: 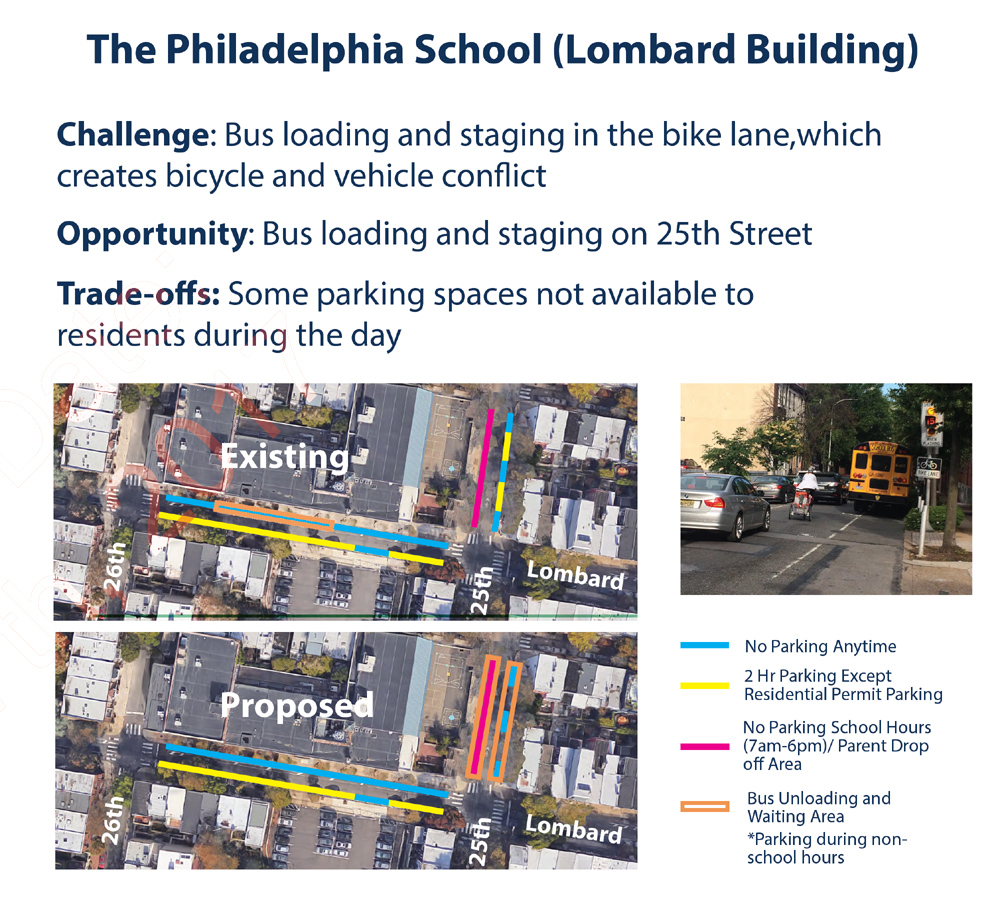 Sign our petition today to let Councilmember Johnson and The Philadelphia School know today that we need a safer Lombard Street for all of its road users.

Update 9/9/2019:  We have had productive conversations with The Philadelphia School regarding their usage of the Lombard Street bicycle lane for school bus loading:

The Philadelphia School, working with Philadelphia School District Transportation, has instructed its assigned bus company to conduct expeditious drop offs and pickups on the Lombard St bicycle lane, and to not use it for staging or idling. The Philadelphia School is also seriously willing to explore solutions to this ongoing issue and has recommended that the City reconvene meetings concerning a protected bike lane on Lombard St. with all the stakeholders involved.

See their letter regarding this issue here.

Progress is being made but we still need your signatures to demonstrate that there is significant support both locally and city-wide for a protected bicycle lane on Lombard.