Today, Philadelphia’s Office of Transportation, Infrastructure and Sustainability (OTIS) announced that they are proceeding with the ‘Mixed Layout’ option for Washington Avenue.

This choice to switch from a 3-Lane Layout to a Mixed Layout compromises on safety in order to appease a few politically-connected individuals and businesses.

Washington Ave from 12th to 16th St - the section with the highest number of crashes - would remain unchanged under the latest proposal. We still don't know what kind of traffic safety interventions will be on these dangerous blocks slated to maintain the existing 5-lanes. 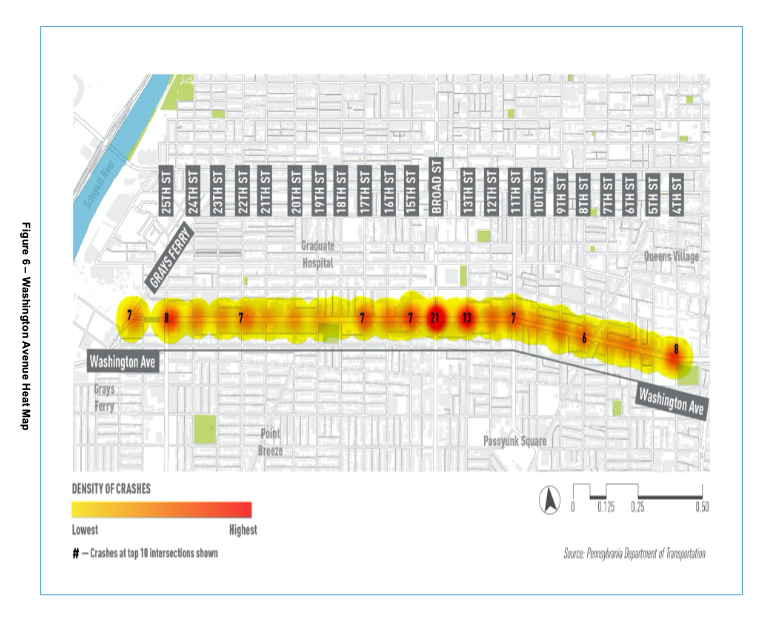 Compared to the original 3-Lane Layout, these plans will increase the pedestrian crossing distance for over half of the intersections covered by this project. EM Stanton and Jackson Coppin Elementary Schools have catchments split by Washington Ave, and this design will force schoolchildren to cross extra lanes of traffic.

“It’s insulting that OTIS announced their new Washington Ave final plan before having a single public meeting about this since 2020. They only had back-room meetings that were invitation-only to a few dozen individuals. It was these people who decided that our childrens’ safety on their walk to school is not worth slowing their drive times.” says Jesse Bacon, the parent of a child who attends EM Stanton School.

"Sacrificing pedestrian safety so drivers can get to Broad Street less than a minute faster is bad enough, but to specifically target the intersections where kids have to cross to get to Stanton Elementary and Chew Playground is particularly egregious" said J.R. King, a point Breeze resident and EM Stanton parent.

“Going back to 2014, OTIS was aware that marginalized communities were often left out of planning conversations. However, when the City reopened the engagement process in 2021, instead of opening the process to more people, OTIS instead chose to narrow it. There was no public statement, no push to involve new voices, only closed door meetings with unelected, self-proclaimed leaders.” said Will Tung, 5th Square Member.

Will Tung adds, “In every public survey, people have overwhelmingly selected the safest option: the 3-Lane Layout. More community organizations and local schools also support the original 3-Lane Layout. The selection of a Mixed Layout invalidates the voices of thousands who have participated. This shows the true underbelly of political favoritism in this city.”

“Making a street safer means making it more accessible to more people. Not just people who choose to drive or ride a bike but those 30% of Philadelphians who don’t have the luxury to own a vehicle, those who rely on walking and taking public transit to get to work or to get to school,” said PennEnvironment Organizer, Nicole Brunet. “OTIS had the opportunity to put the community first but they bowed to the pressure of a select few.”

PennEnvironment Research & Policy Center is dedicated to protecting our air, water and open spaces. We work to protect the places we love, advance the environmental values we share, and win real results for our environment. For more information, visit www.pennenvironmencenter.org.

5th Square volunteers can be reached at [email protected]