TONIGHT: South Philly and Riverwards neighbors can attend one of three local meetings happening tonight to voice their support for safer streets for biking and walking. 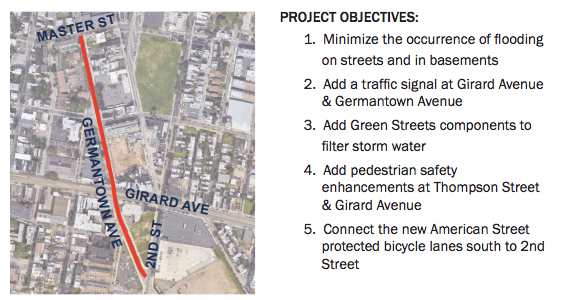 In South Kensington, the Office of Transportation, Infrastructure and Sustainability (oTIS) and the Water Department will be presenting the City's plans for Germantown Avenue, connecting South Kensington and Northern Liberties, which will include flooding relief and an improved bike connection between American Street and 2nd Street. RSVP to attend.We're asking supporters of safer streets and Vision Zero to attend the meeting and politely voice their support for OTIS's proposal, and better cycling infrastructure in the Riverwards neighborhoods. Click here to RSVP

DRWC is proposing re-purposing the side lanes flanking Washington Ave from Fourth to Front Street from automobile traffic.  DRWC needs all the support we can muster to retire Washington Avenue's auto-centric identity, and turn it into a great street for people.

Wednesday, April 10, 5:30 - 7:30 pm
Green Economy Town Hall
In partnership with Temple University's Office of Sustainability, Defend Our Future invites you for an evening discussion about the future of the Green Economy in Temple's Walk Auditorium.

Thursday, April 11, 7 - 9 pm
** 5th Square Transit Committee - April Meeting **
We are having our monthly Transit Committee meeting at WeWork (1900 Market St.) We will be discussing the feedback on SEPTA's new frequent bus service maps and the agency's plans for them with guest Lex Powers, Long Ranger Planner at SEPTA. We'll also be planning for the upcoming SEPTA and City Council budget hearings. Whether you've been coming to these meetings or it's your first time, all are welcome to attend!

Saturday, April 13, 8:30 am - 1:30 pm
2019 Friends of Neighborhood Education (FONE) Summit
A summit for anyone working on building support for Philadelphia's neighborhood public schools. Whether you're a part of a "Friends" group, a Home & School Association, or School Advisory Council or are interested in developing one, this event will help bring together people doing this work all over the city to learn and network.

Our petition to prevent Midwood Investment's proposed driveway from ruining the pedestrian landscape of the Italian Market is gaining traction, with press from PlanPhilly, Curbed, and South Philly Review! Please sign it if you haven't already.  Quick update: the project went to its first Civic Design Review meeting before the Planning Commission on April 2nd, and was continued, so it'll be back for another meeting a month from then. We need volunteers to contact Councilmember Mark Squilla at [email protected] and (nicely!) ask him to do whatever he can to get the curb cut moved to Washington Avenue.

Following last week's announcement of NYC nearing the approval of congestion-pricing, our local press is hot on the case looking at the option of road pricing as a solution to Philly's traffic woes. PhillyVoice writes, "While nothing is imminent in Philadelphia, New York's experiment shouldn't be overlooked as the first of what could be many dominoes." Jason Laughlin from the Inquirer tracked down opinions from local politicians on this issue, quoting Councilwoman Helen Gym (a 5th Square endorsed candidate for City Council At-Large) saying "As cities take on gridlock and congestion with meaningful policy solutions like congestion pricing, I’m certainly paying attention."

Is congestion pricing a fair way to raise needed transit revenue? Absolutely! The New York Times writes, "the government has heavily subsidized driving, or hidden the reality of who pays for it in places no one sees."  A Medium post by Michael Manville lays out the equity case:, "It is appropriate to worry that priced roads might harm the poor while helping the rich. But we should also worry that free roads do the same, and think about which form of unfairness we are best able to mitigate." In our region, PlanPhilly writes how congestion-pricing can fix our transit funding crisis which the Inquirer Editorial Board has endorsed.

On PA transit funding, last week we got some good news and some bad news.  Good news first: A federal judge dismissed a lawsuit that could have cost Pennsylvania hundreds of millions of dollars a year in transit funding. Here's the bad news: Act 89, passed in 2012, said the PA turnpike’s annual payments would be reduced to a small fraction of its current level by 2022, from $450 million to just $50 million, to be replaced by a tax on auto sales. This has left state agencies scrambling to seek alternative sources to make up this gap in Turnpike funding. 5th Square will be actively working on organizing on this issue with partner organizations from across the state over the next few years.

University City Review writes about Jamie Gauthier's campaign picking up momentum in West Philly, covering her latest office opening fundraiser. "Gauthier said she wasn’t at all surprised by what she considered a significant turnout and that the campaign has generated a great deal of excitement. -- “I think it’s time to think about the future of our communities, to get some new ideas, some fresh perspectives to face some of the challenges we have here,” said Gauthier."  Gauthier also shined at a local candidates' forum while the sitting Councilmember was at a fundraiser hosted by a developer who benefitted from city land sales orchestrated by the incumbent. In a show of strength, Gauthier's campaign raised twice as much money as her opponent, with a much higher showing from small individual donors than her opponent. 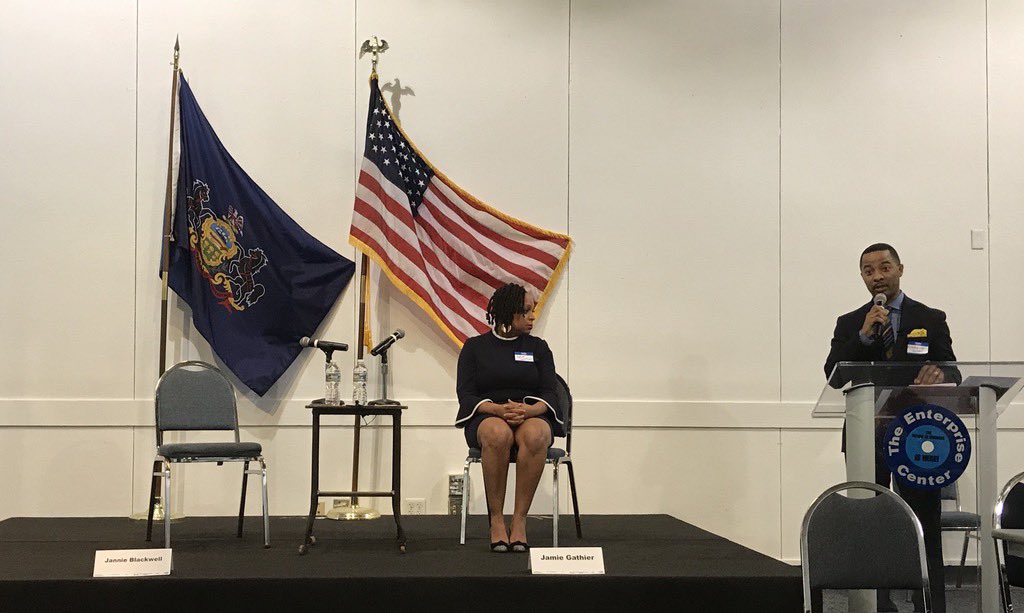 Lauren Vidas has also been getting lots of press mentions, with Philadelphia Gay News profiling our candidate and her campaign to unseat an entrenched incumbent in City Council's 2nd District. "A decade of working in city government and volunteering for community groups and nonprofits has given Lauren Vidas a valuable piece of insight that’s fueling her run for City Council: "A lot of good can happen in communities when government is working properly. And right now," she said, "it’s just not."  The Inquirer also profiled the race, writing of Vidas that, "she’s running for City Council, she says, to prevent longtime district residents from being displaced and to ensure that neighborhoods like nearby Point Breeze develop fairly and transparently."

The Association for Community Design's Annual Conference is seeking proposals for presentations and workshops. Due 4/15.

The Global Philanthropy Partnership (GPP) and the Urban Sustainability Directors Network (USDN) are pleased to offer seven summer 2019 fellowship opportunities with local governments, including the City of Philadelphia. (rolling basis throughout April)

Walk and Bike to School Day wants to encourage walking and biking by celebrating students that walk, bike, and roll to school. This City initiative is looking for schools to participate. Due 4/29.

The Knight Foundation is seeking applicants for the Emerging City Champions 2019 Fellowship from young civic innovators. Due 5/12.

In Philadelphia every summer, there are over 500 streets designated as “Play Streets”, which are streets closed off to traffic where neighborhood children can receive a meal and play together. In order to make those Play Streets more playful, Fab Youth Philly (www.fabyouthphilly.com) created the Play Captain Initiative (www.playcaptains.com), which is a summer job for teens. Those teens will create and lead play activities on a number of Play Streets throughout Philadelphia. Due 6/17.

Logan Square Neighborhood Association is seeking Board Members. Due 4/21.

DVRPC is seeking a GIS Application Developer and Transportation Planner

The 2020 Census is hiring for a variety of temporary jobs, including census takers, recruiting assistants, office staff, and supervisory staff.