2019 was a banner year for 5th Square, Philadelphia's urbanist political action committee. As we celebrate our fifth year as an organization and our second City council cycle, we reflect on the impact we've made around important urbanist causes for better mobility, housing, and public space.

5th Square saw impressive growth in our supporting member base in 2019, growing five times from 30 sustaining members at the end of 2018 to over 150 today. And we've continued to invest in our grassroots mobilization capacity, growing our subscriber email database from about 10,000 people at the beginning of the year to over 14,000 subscribers at the end of 2019. We're also celebrating our 100th issue of our weekly urbanist newsletter, featuring news, events, jobs, and action alerts concerning Philadelphia's built environment. We've also seen big increases in our reach on Twitter, Facebook and Instagram thanks to help from our dedicated volunteer membership, namely Anne Putnam and Chi-Hyun Kim keeping these channels going strong.

Our Slack Workspace is also busy as ever with over 70 weekly active members and 56 public channels, many of our advocacy ideas are generated and polished here as they come to fruition. (Subscribing Members enjoy access to our Slack Workspace)

5th Square initiatives and members were also mentioned in over 30 news articles in the past year in print, radio, and TV pieces. Several editorials penned by 5th Square members in 2019 were published by The Philadelphia Inquirer and WHYY.  We also created some media of our own, including a video editorial demonstrating the downsides of using leaf blowers to clean our streets.

We're especially proud of the results of our City Council electoral work this year, spearheaded by our Organizing and Elections lead Steph Davis. In a highly-competitive election year, we drove the larger political conversation about important issues like improving public transit, putting people first on our streets, and continued progress on pro-urban planning and zoning reforms.

Thanks in part to the work of our members and volunteers calling, texting, knocking doors, and donating to candidates, we can welcome three of our endorsed candidates to City Council when they meet again in January!

In 2019 we began hosting regular monthly meet-ups on the second Thursday of each month, and welcomed esteemed speakers such as:

5th Square sponsored or supported actions for several under-the-radar issues in 2019, many of which were successful. We helped amplify neighborhood leaders' push to stop a curb cut in the Italian Market at 9th and Washington, and supported Councilman Mark Squilla's overlay bill to keep driveways out of the market in the future, to allow for pedestrian hours. We also ran several repaving season petitions to support installation of better bike and pedestrian infrastructure, like on Delaware Avenue and the Grays Ferry Bridge. From what we've heard, the Grays Ferry action is likely to be successful, and the protections have already been installed on Delaware Ave. We plan to continue discussions about the plans for Lombard Street and 22nd Street with the City.

We also helped drive turnout to many public meetings for safer streets and good urban infill housing projects, working with local members and neighborhood tipsters to build support for positive changes that nonetheless tend to get vetoed over parking and density concerns. We also worked with other organizations to organize our supporters collectively on larger issues like the threats to the Central Delaware Overlay, the urban vision for the waterfront, and a last-ditch effort by Councilmembers Jannie Blackwell and Darrell Clarke to double minimum parking quotas.

Our Transit Committee has also been hard at work, showing up to SEPTA's board meetings & budget hearings and calling on the agency to prioritize ridership growth, eliminate the transfer penalty, and support the Bus Network Redesign and trolley modernization projects.

At our Transit Committee meetings this year, we heard from SEPTA's Jen Dougherty about Bus Network Redesign, and from SEPTA's Lex Powers, on their new service maps emphasizing frequent service.  We also helped organize the annual Transit Equity Day fair, and partnered with Young Professionals in Transportation on the first Public Transit Pub Crawl. 5th Square has also been one of 8 core organizations working to form a new Transit Coalition that will be launching in 2020 to support the goals of SEPTA's Bus Network Redesign, fare policy reform, and other improvements for riders. 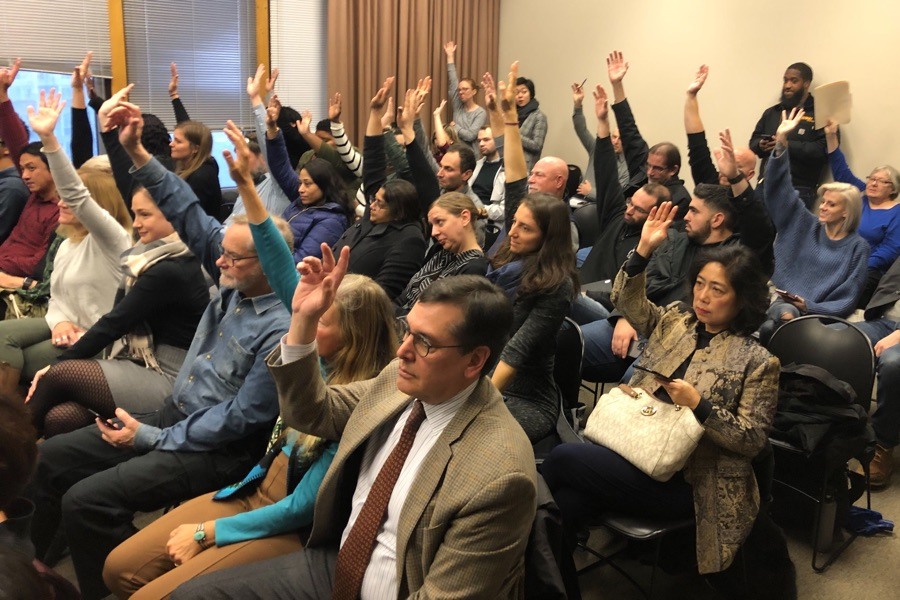 We need your support to make this possible—please consider joining us in the fight for a more livable and sustainable city for all Philadelphians.

Become a member or make a donation to support 5th Square.